day after two fresh cases of the novel coronavirus were reported in India, the Union health ministry on Tuesday issued a travel advisory suspending all regular visas/e-visas granted on or before March 3 to nationals of Italy, Iran, South Korea, Japan who have not yet entered India. 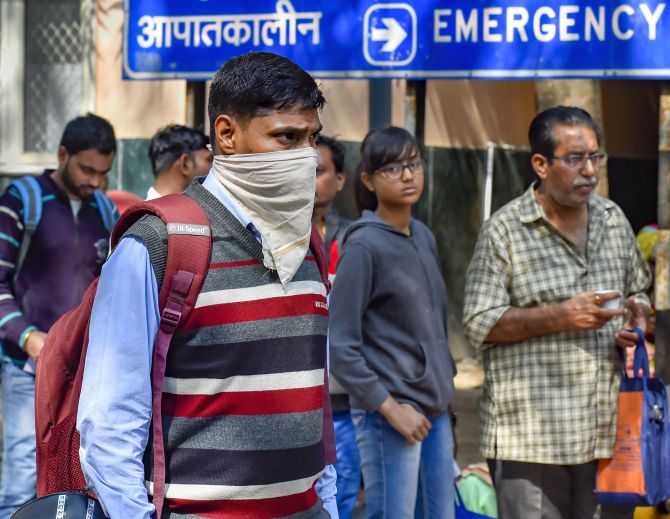 IMAGE: A man uses a handkerchief to cover his face in the wake of novel coronavirus outbreak at RML Hospital in New Delhi. Photograph: Ravi Choudhary/PTI Photo

In view of the emerging global scenarios regarding COVID19 disease, in supersession of all earlier advisories, the government issued the new travel advisory.

The advisory also suspends visa on arrival issued on or before March 3 to Japanese and South Korean nationals who have not yet entered India.

Those requiring to travel to India due to compelling reasons, may seek fresh visa from nearest Indian embassy/consulate, said the advisory.

Regular (sticker) visas/e-visas granted to nationals of China, issued on or before February 5, were suspended earlier. It shall remain in force, it said.

The advisory said regular (sticker) visas/e-visas granted to all foreign nationals who have travelled to China, Iran, Italy, South Korea and Japan on or after February 1 and who have not yet entered India stand suspended with immediate effect.

It also said diplomats, officials of United Nations and other International bodies, OCI cardholders and aircrew from above countries are exempted from such restriction on entry.

However, their medical screening is compulsory.

"Passengers of all international flights entering into India from any port are required to furnish duly filled self-declaration form (including personal particulars i.e. phone no. and address in India) and travel history, to health officials and immigration officials at all ports.

It said all Indian citizens are advised to refrain from travel to China, Iran, South Korea, Italy and asked them to avoid non-essential travel to other COVID-19 affected countries.

The health ministry on Tuesday said six cases with "high-viral load" were detected during sample testing in Agra and these people have been kept in isolation.

The six had come in contact with a 45-year-old patient from Delhi, whose case came to light on Monday, and they include his family members.

According to government sources, the man, who is a resident of Mayur Vihar, had visited them in Agra.

The six have been kept in isolation at Safdarjung Hospital in Delhi and their samples are being sent to NIV-Pune for confirmation.