Coronavirus death toll soars to 908; WHO sends team to China

The death toll in China's coronavirus outbreak has gone up to 908 with 97 new fatalities reported mostly in the worst-affected Hubei province and the confirmed cases of infection crossing 40,000, Chinese health officials said on Monday, as a team of international experts led by the World Health Organisation is set to arrive in Beijing to help contain the epidemic. 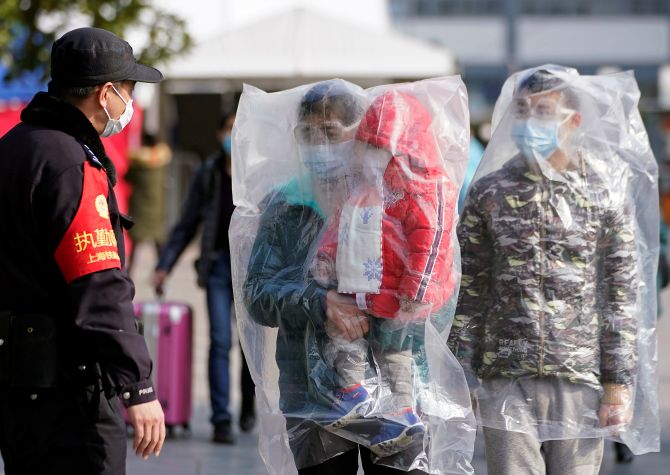 IMAGE: Passengers wearing masks and covered with plastic bags walk outside the Shanghai railway station in China as the country is hit by an outbreak of a new coronavirus. Photograph: Aly Song/Reuters

According to China's National Health Commission, 91 deaths were reported in Hubei province, the epicentre of the epidemic, two in Anhui, and one each in Heilongjiang, Jiangxi, Hainan and Gansu.

There were 97 deaths and 3,062 new confirmed cases of the lethal infection on Sunday, it said.

A total of 908 people have died of the disease and 40,171 confirmed cases of the outbreak have been reported in 31 provincial-level regions so far, it said.

Another 4,008 new suspected cases were reported on Sunday. A total of 296 patients became seriously ill, the commission said, adding that 6,484 patients remained in severe condition and 23,589 people were suspected of being infected with the virus.

A total of 3,281 people have been discharged from hospital after recovery, it said.

A team of international experts led by the WHO would arrive in China on Monday night to assist the Chinese health officials to contain the spread of coronavirus outbreak.

"I've just been at the airport seeing off members of an advance team for the @WHO-led 2019nCoV international expert mission to China, led by Dr Bruce Aylward, veteran of past public health emergencies," WHO director general Tedros Adhanom Ghebreyesus said in a tweet.

The WHO experts team, led by Aylward, will arrive in Beijing on Monday night, state-run China Daily reported.

Earlier, he said China had agreed to allow the WHO experts team comprising different countries.

Their arrival was expected to boost efforts to contain the virus which is causing havoc in China and many parts of the world, even though the Chinese officials claim the confirmed cases have begun to drop in the last few days.

The WHO said the number of cases of the coronavirus in China was "stabilising", which is "good news".

It, however, cautioned that it was too early to make any predictions about whether the virus might have peaked.

"There has been a stabilisation in the number of cases reported from Hubei," Michael Ryan, head of WHO's Health Emergencies Programme said at a briefing in Geneva.

"We're in a four-day stable period where the number of reported cases hasn't advanced. That's good news and may reflect the impact of the control measures that have been put in place," Ryan was quoted as saying.

He added that it was "very early to make any predictions".

Meanwhile, millions of people have started returning to Beijing and other cities in China after the extended holiday of China's New Year.

The holidays, which began on January 24 and were due to end on February 3, has been extended till February 9 as part of its efforts to contain the spread of the virus.

However, the employees of most of the offices have been asked to work from home.

As the biggest reverse migration began, Chinese officials said on Saturday that the cases of the deadly infection had started declining for the first time after weeks of sharp rise.

China's new confirmed cases of novel coronavirus outside Hubei has been dropping for six consecutive days, according to the commission.

A total of 444 new confirmed cases were reported on Sunday outside Hubei, the data showed.

The numbers of new confirmed cases in these provinces during the past days were 890 on Monday, 731 on Tuesday, 707 on Wednesday, 696 on Thursday, 558 on Friday and 509 on Saturday, the commission said.