The number of confirmed coronavirus cases in Pakistan sharply rose to 212 on Tuesday, amidst conflicting statements by authorities on the nation's first casualty due to the viral infection. 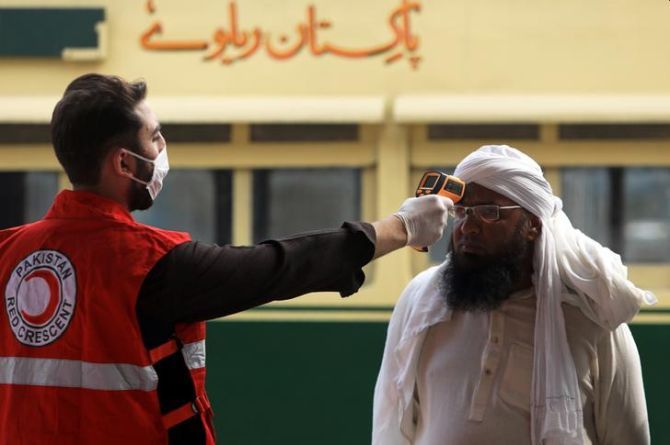 IMAGE: A worker checks a man's temperature following an outbreak of the coronavirus disease at a railway station in Peshawar, Pakistan. Photograph: Fayaz Aziz/Reuters

The Sindh province is the worst-hit with 172 cases, followed by 15 in Khyber Pakhtunkhwa, 10 in Balochistan, 8 in Punjab, 5 in Gilgit-Baltistan and 2 in Islamabad, officials said.

According to Meeran Yousuf, media coordinator to the Sindh health minister, the total number of COVID-19 cases rose to 172 in Sindh province on Tuesday. Of the 172 patients, 134 are in Sukkar, 37 in Karachi and one in Hyderabad city.

Meanwhile, there were conflicting statements on the first coronavirus death in Pakistan.

Earlier in the day, Punjab Health Minister Yasmin Rashid in a press conference in Lahore confirmed Pakistan's first casualty due to the novel coronavirus.

"One COVID-19 patient who was brought from Hafizabad, some 150 km from Lahore, died on Tuesday," he said.

In a statement, the National Command and Control Centre also confirmed the death.

According to the statement, the patient, who came from Muscat on March 15 and was tested positive, was admitted to Lahore's Mayo Hospital where he died on Tuesday.

However, later in the day, Punjab Chief Minister Usman Buzdar rejected the statements.

The chief minister in a tweet said according to the test report, the person did not die of coronavirus.

In a statement, the Pakistan army said all medical facilities of the armed forces were "operationalised and geared up to meet any eventuality to deal with the pandemic".

A central testing laboratory has already been set up at the Armed Forces Institute of Pathology in Rawalpindi, it said, adding that COVID-19 help desks have been established at all military hospitals.

The army chief has "directed all commanders to take maximum necessary measures to assist civil
administration".

As the country's already fragile economy came under more pressure due to the viral outbreak, the State Bank of Pakistan on Tuesday announced to cut its policy rate by 75 basis points to 12.50 from 13.25 to tackle the economic challenges.

Among other things, Pakistan shut down the western border with Afghanistan and Iran. It also ordered the closure of all education institutions in Pakistan till April 5 in view of the virus outbreak.

Meanwhile, the opposition accused the government of failing to contain the spread of virus. It also alleged that the quarantine facilities for pilgrims who returned from Iran and kept at Taftan border
point are poor.

Sajjad Hussain and M Zulqernain
Source: PTI© Copyright 2021 PTI. All rights reserved. Republication or redistribution of PTI content, including by framing or similar means, is expressly prohibited without the prior written consent.
SHARE THIS STORY
Print this article 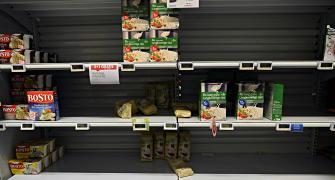 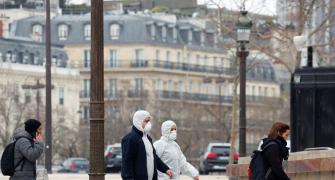 Coronavirus crisis could stretch up to August: Trump 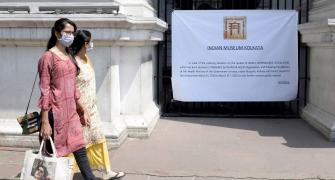 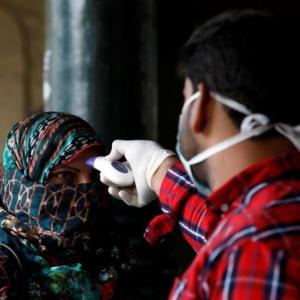 Coronavirus cases in Pakistan surge to 183