Coronavirus cases in Pakistan surge to 183

Pakistan's coronavirus cases surged to 183 on Monday after dozens of new infection were reported in Sindh province. 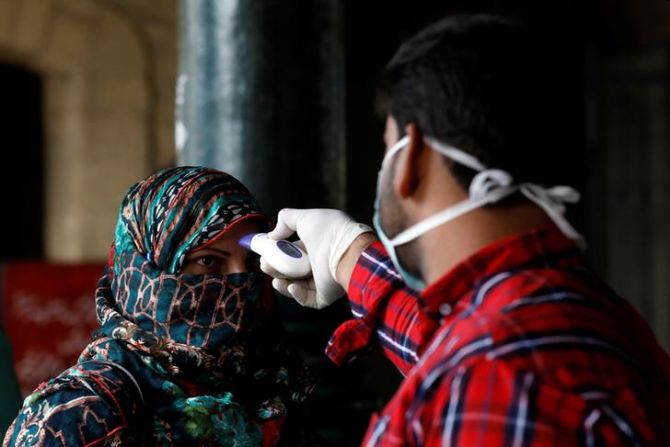 IMAGE: A health worker checks a woman's temperature amid coronavirus fears, at a counter at the Cantonment railway station in Karachi, Pakistan. Photograph: Akhtar Soomro/Reuters

Sindh government spokesperson Murtaza Wahab said that 119 patients were among the passengers who arrived in Sukkur from Taftan.

The "exponential increase is largely due to the recent inflow of people brought in from Taftan after a purported quarantine," said Wahab said.

The number of quarantined pilgrims in Taftan rose to 4,000 by March 11. Some of them were allowed to go their provinces after local Balochistan government said it could not handle the rush of pilgrims coming from Iran.

About around 300 people were taken to Sindh and quarantined at Sukkur to undergo tests before going to their homes.

Sindh Chief Minister Murad Ali Shah accused in a press conference that pilgrims were not properly isolated at Taftan and were kept together.

Meanwhile, the government is taking steps to contain the pandemic as authorities in Punjab province converted all public sector universities' hostels into quarantine centres as an immediate arrangement.

Officials said that universities were informed in the province to clean all hostels and shift the belongings of students, if there were any, to store rooms after properly tagging them for identity.

The Prime Minister's Advisor on Health Dr Zafar Mirza said that all educational institutions have been closed and their staff stopped from attending the institutions.

The deadly virus, which originated in China's Wuhan city in December, has claimed over 7,000 lives and infected more than 170,000 people over 135 countries and territories.

China remains the hardest-hit with 80,860 infections and 3,213 deaths. After China, Italy and Iran are the two worst-affected countries.

Among other things, it decided to close down the western border with Afghanistan and Iran. It also ordered the closure of all education institutions in Pakistan till April 5 in view of the virus outbreak.