News
Business
Movies
Sports
Cricket
Get Ahead
Money Tips
Shopping
Sign in  |  Create a Rediffmail account
Rediff.com  » News » Cops are there but not doing anything: Delhi residents recall horror

Cops are there but not doing anything: Delhi residents recall horror

As mobs ran riot in the Bhajanpura-Yamuna Vihar area all through Monday night and Tuesday, residents recalled the fear they underwent, with an elderly man pleading with folded hands before the rioters to spare him as he returned from a hospital where his grandson is admitted. 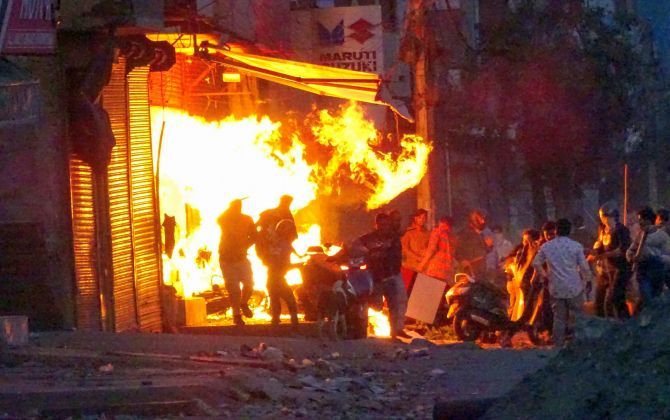 IMAGE: Rioters set ablaze a shop during clashes between those against and those supporting the Citizenship (Amendment) Act in at Gokalpuri in north east Delhi. Photograph: PTI Photo

"I was returning from Ganga Ram Hospital where my grandson is admitted. It was really difficult reaching back home. I had to plead with folded hands with both the groups who were present on the roads after every few steps.

"Only I know how I managed to return home," said the elderly man, a resident of C Block in Yamuna Vihar.

A petrol pump was also set on fire in Bhajanpura on Monday. Locals said mobs spilled on main roads, interior lanes and bylanes in residential areas, while the security personnel were deployed only on the main road, which leads to Bhajanpura, Rohini on one side and Loni, Ghaziabad via Gokalpuri flyover on the other.

"The force is inadequate. Also, they are there but not doing anything... I fail to understand why," another Yamuna Vihar resident said, requesting anonymity.

Mobs went on a rampage at market places, set shops on fire even as large groups gheraoed homes of some people, attacking their main gates with sticks and stones.

"A family's house in my neighbourhood was targeted by a mob of around 200 in the night. They kept calling us and others for help. They called up police also. But nobody could help them.

"This morning they showed me a footage of the attack caught in their CCTV camera and it is terrifying. Everyone here is scared," a prominent resident of Yamuna Vihar said requesting anonymity as he "feared" giving out his name could lead his "family into trouble".

On Tuesday, there were also people stuck in riots who had to go to airport or the Anand Vihar railway station.

"A neighbour of mine had to go to catch a train from Anand Vihar. But he remained stuck in his house. There are several people from Yamuna Vihar who had to go out, some even to airport, but could not because of the violence," Kirti Nath Jha, a local, said.

By the evening, rumours of vandalism also spread in areas such as Krishna Nagar and Laxmi Nagar in East Delhi, leading to closure of markets and panic among locals.

"A few young men on motorcycles raced past the market shouting 'aa gaye, aa gaye' (they've come, they've come) leading to panic. Immediately, shops were shut and the streets bore deserted look. But it turned out to be a rumour at a sensitive time. We contacted the local police and they reached the market to quell the rumours," said Ashok Suri, a member of Confederation of All India Traders.

A stampede-like situation occurred in Laxmi Nagar around 6 pm over rumours of "gunshots being fired" in nearby Khureji Khas, which has been an anti-CAA protest site and witness to violence in last two days.

Several shops on Mangal Bazar road pulled down their shutters even as vendors ran with their carts as hundreds of people rushed to safety after they saw others running to safety.
At least 13 people, including a police head constable, have died and over 200 were injured since Monday as mobs went on a rampage in Maujpur, Jaffrabad, Babarpur, Bhajanpura, Yamuna Vihar, Chandbagh areas in northeast Delhi. 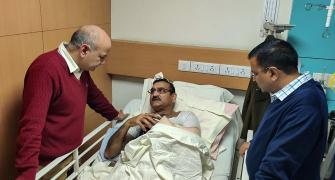 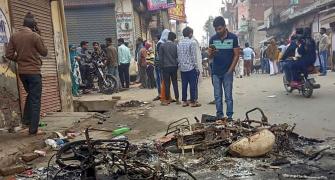