While the conversion of girls belonging to minority communities into Islam and their marriages with Muslim boys have been lauded in religious circles in Pakistan, two Muslim-turned-Christian girls and their husbands are on the run in Punjab province.

The conversion of two Muslims girls falls under the act of 'Murtad' and according to Islamic teaching the minimum punishment for such persons is lifetime imprisonment or simply the death penalty.

The couple remained safe for more than two years, as they had not disclosed their previous religious background to neighbours. "But when it was disclosed that our wives were Muslim-turned-Christians, the local Muslims turned violent and asked us to return our wives to them," Amin Masih told rediff.com.

The couples were living happily until a quarrel broke out between Amin Masih and his wife Shehnaz, following which she ran to the street and shouted that she was a Muslim and that the Christians were torturing her.

The news spread like jungle fire in the neighbourhood. The brothers were asked to immediately leave their wives "as Muslims could not live with Christians".

The Masih brothers left the area. Interestingly, Shehnaz later termed her act of disclosing her religion in the neighbourhood as "irresponsible".

After escaping from Narang Mandi both the couples are living in Thokar Niaz Beg in Punjab with their relatives. But even the hosts have refused to keep them anymore as people of this locality have also started protesting.

Conversion or 'force conversion' of minorities has become a common practice in Pakistan, especially in Sindh province.

Last week a much highlighted case of 'forced conversion' of three Hindu girls -- Faryal (Rinkle Kumari), Hafsa Bibi (Dr Lata) and Haleema Bibi (Asha Kumari) -- was decided by the Pakistan Supreme Court which ordered that the girls should decide their own fate. The girls preferred to stay with their Muslim husbands rather with their families.

Although the decision was opposed by the families and rest of Hindu community in Pakistan, it was celebrated in Sindh.

Renowned Pakistani scholar Mufti Muhammad Naeem, the head of the Jamia Binoria International in Karachi, told rediff.com, "If it was a simple love marriage issue with no religious factor behind it, then these so-called human rights defender NGOs would not have raised their voice. We will not tolerate any technique of anyone intended to deter or dismay the newly converted Muslims by promoting propaganda against Islam."

In Islam one can easily be accepted, but when it comes to quit the religion and embrace another one, the person becomes 'Murtad', which describes a person who converted to another religion or to atheism after being a Muslim. 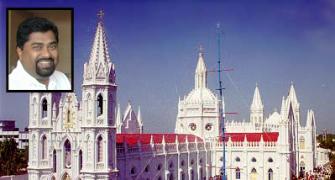