A tile-laden container lorry crossed into a wrong lane and rammed into an oncoming Kerala-bound transport bus from Bengaluru in a high-speed head-on collision in a highway in Tamil Nadu in the wee hours of Thursday leaving 20 passengers dead and 28 injured.

Police said the accident involving the Kerala State Road Transport Corporation (KSRTC) bus occurred around 4 am on the Salem-Kochi highway at Avinashi in Tirupur, 40 km from Coimbatore.

As many as 48 passengers were on board the bus that was proceeding to Ernakulam from Bengaluru, police said.

20 passengers, all Keralites, died on the spot while the injured were admitted to hospitals in Tirupur and some referred to Coimbatore, police said.

Tamil Nadu Chief Minister K Palaniswami said 23 people were seriously injured and were undergoing treatment in various hospitals while five others sustained simple injuries and were proceeding to Kerala.

The lorry suffered a tyre burst before colliding with the KSRTC bus, he told the state Assembly, adding, all the victims were Keralites.

The driver of the lorry apparently lost control after the tyre burst and jumped the median and collided with the oncoming passenger bus, police said.

The driver Hemaraj, a native of Ernakulam, has been arrested.

Most of the passengers were asleep when the lorry crashed into the bus that reduced the passenger vehicle to a heap of mangled metal. 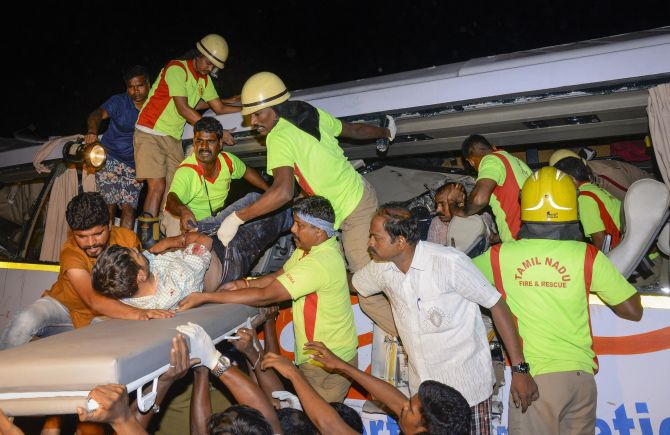 The accident which happened on a day that marked the 82nd anniversary of the founding of the Kerala's State Motor Service was described as the worst in Tamil Nadu in recent times.

"It was a high speed collision. The container lorry went out of control," said Palakkad Superintendent of Police Siva Vikram.

'Extremely anguished by the bus accident...In this hour of grief, my thoughts and prayers are with the bereaved families. I hope those who are injured recover at the earliest,' the PM's Office said in a tweet quoting Modi.

The accident left the survivors shell-shocked.

Karishma, on her way to Ernakulam, said she was seated on the left side of the bus and was sleeping at the time of the mishap.

"When I woke up suddenly, I saw many people running around and the injured being taken in ambulances," the woman told the media.

Another passenger identified only as Alan said he was still finding it difficult to overcome the shock.

"I have sustained a minor injury on my leg. But my friend is injured on the nose and I am taking him to hospital," he said.

Jemin George said he suffered a cut on his lips and an injury to his forehead that required 10 stitches.

"I do not know what exactly happened. I was sleeping," he said, adding, he was referred to a hospital in Coimbatore.

A weeping woman passenger alleged the container lorry was overloaded and there were not many vehicles on the road.

She said the right side of the bus was completely damaged.

Though reports initially suggested that the bus was proceeding towards Thiruvananthapuram in Kerala, officials later clarified its destination was Ernakulam.

Palaniswami said he has asked the Tirupur administration to coordinate with their Palakkad counterparts, to expedite relief works including sending the bodies of the deceased to the neighbouring state.

"I have directed the Tirupur collector and police officials there to set up a help centre to assist the relatives of the victims and also expedite the process of sending the bodies of the deceased by contacting Kerala officials," he said.

"The state government will provide a compensation of Rs 10 lakh to the bereaved families, Rs two lakh will be given within a week. The rest of the amount will be given following the procedures," Saseendran said.

"The families of the KSRTC employees will be given Rs 30 lakh each under the insurance scheme," he added.

The state government also declared that it will take care of the medical expenses of the injured passengers.

The health department has sent ambulances to Tirupur to bring back the bodies.

The death of driver Girish and conductor Baiju came as a shock to many of his colleagues in the KSRTC who knew them.

Their colleagues recalled that Girish and Baiju were honoured by the KSRTC management for assisting a woman passenger who took ill during a trip to Bengaluru from Ernakulam in June 2018. 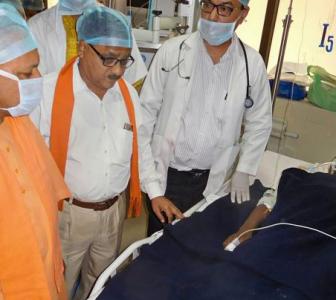