Some eyewitnesses said the driver tried to speed across the level crossing even when onlookers tried to draw his attention to the approaching train. 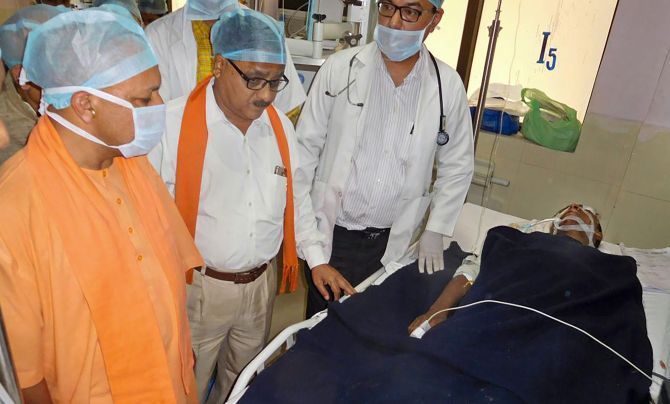 Thirteen children on their way to school were killed on Thursday when a train rammed into their van at an unmanned railway crossing in Kushinagar, leaving blood-splattered bodies, water bottles and school bags strewn around.

Five others were injured as the Thawe-Kapatanganj passenger train hit the van carrying 25 people, mostly children from Divine Public School, at 7 am.

Local people who rushed to the level crossing gate at Behpurva, about 50 km from Gorakhpur, saw bodies of children, aged between 8 and 10 lying about.

The level crossing was described as ‘unmanned’, with no barrier to stop road traffic. But a ‘gate mitra’ (railway volunteer) was posted there.

Uttar Pradesh Chief Minister Yogi Adityanath on Thursday faced angry protests during his visit to Kushinagar to get a first hand account of the train-school van collision.

As Adityanath reached the accident spot after visiting the district hospital, an angry crowd raised slogans against railway and local authorities.

The chief minister tried to pacify them using a megaphone. "Narebazi band karo, nautanki band karo (stop raising slogans, stop this drama). I have come here to express my sympathies," he said.

However, the protesters were not satisfied and some of them squatted on the railway track.

Some eyewitnesses said the driver, who is among the injured, tried to speed across the level crossing even when onlookers tried to draw his attention to the approaching train.

One eyewitness said that the van then got stuck in the middle of the rail tracks.
Prime Minister Narendra Modi said he was ‘deeply pained’ over the accident action.

"As I was coming to you, I got the sad news from Uttar Pradesh's Kushinagar about the train ramming into a school bus in which children were travelling (and that) many children have been killed,” he said at a BJP meeting in poll-bound Karnataka.

Uttar Pradesh Chief Minister Yogi Adityanath, who reached Kushinagar to get a first-hand account, faced protests from the local people. IMAGE: The CM addresses people at the accident site. He was greeted by angry protests by locals.

An angry crowd at the accident spot raised slogans against railway and local authorities. Some protesters squatted on the tracks demanding that railway personnel should be posted at the unmanned crossing to avoid such accidents.

The train was on way to Gorakhpur from Siwan. The gate 45 near Dudhi station falls in Railway's Varanasi division.

An official spokesperson said the ‘gate mitra’ tried to stop the van from crossing the tracks, but failed.

The accident comes two years after a similar tragedy in Uttar Pradesh’s Bhadohi district in which eight children were killed and 14 others injured when a school bus was hit by a train at an unmanned railway crossing.

Chief Minister Adityanath told reporters in Kushinagar that the driver appeared to be at fault.

"He is said to have earphones on... all facts will be known in the inquiry headed by the Gorakhpur Commissioner," he said.

Police have registered a case against the van driver and the school management, charging them with culpable homicide not amounting to murder. The district's basic education officer has been suspended.

The school also faces a police probe for operating without permission, the state government said.

Four children and the driver of the van are undergoing treatment at BRD Medical College Hospital in Gorakhpur.

Adityanath said if required the injured will be sent to a specialty hospital for treatment.

He announced an ex gratia compensation of Rs 2 lakh for the families of the victims.

He said the state government will take strict action against those found responsible for the laxity.

Directives have already been issued to ensure that such incidents are not repeated and the inquiry report will find out what went wrong in this case, the chief minister said.

Police has registered cases against the school principal and he was being questioned.

Answering a query, Adityanath said the inquiry will establish if the school was unregistered.

The chief minister said he has spoken to Railway Minister Piyush Goyal on train accidents at unmanned crossings and appealed to him to make them manned, and if required build overbridges.

The Railways also announced a compensation of Rs 2 lakh for the kin of each child killed in the accident. 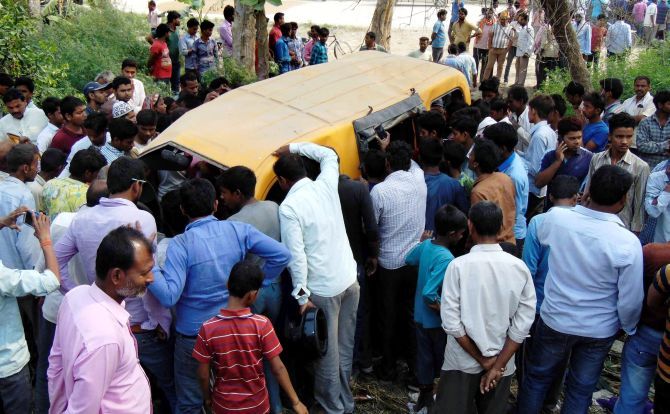 IMAGE: People gather around the mangled school van after the accident.

“I received the unfortunate news of the death of schoolchildren. I have asked senior officials to conduct a probe into the incident,” he said.

UP Congress Legislature Party leader Ajay Singh Lallu also went to the accident site to supervise relief work. He demanded a compensation of Rs 50 lakh for the families of each dead child.

Members of Bar Council, Kushinagar, also complained about the ‘irresponsible attitude’ of the district hospital staff.

They told Adityanath that the doctors there sent the four children and the driver to BRD hospital without even administering first-aid.

Bahujan Samaj Party leader Mayawati condoled the deaths and asked the government to take steps for preventing such accidents in future.

She said despite such cases recurring at the unmanned level crossings, the state and the central governments had remained indifferent. 27 children dead as school bus falls into gorge in Himachal