From being a political force that ruled the national capital for 15 years in a row, the Congress stands decimated after the Delhi election results, failing to win for the second consecutive time even a seat and its vote share getting reduced to its lowest ever of 4.27 per cent. Delhi Congress chief Subhash Chopra on Tuesday resigned from his post, taking moral responsibility for the party's debacle in the Assembly polls.

"I take moral responsibility for the party's debacle and have resigned," he told PTI.

He said it is up to the party high command to take a decision on his resignation.

The grand old party of Indian politics was out of the race in each of the 70 constituencies by distant margins with 63 of its candidates losing their security deposits.

Lack of a credible face, weak strategy and candidates led to the washout of the party in Delhi, where it was seen as a reluctant contestant that lacked the fighting spirit.

The Congress did not win any seat in the 2015 assembly elections but had managed to garner a 9.7 per cent vote share. This time, it stood decimated further after it ceded its vote bank.

The party also started its campaign late after most of its bigwigs in Delhi opted out of the race on being asked by the party leadership to contest.

Their campaign, however, did not help the party much as their candidates lost their security deposits in all the constituencies where the two leaders addressed poll rallies.

The Congress failed to win the hearts of Delhiites with the work initiated during Sheila Dikshit's rule from 1998 to 2013 and the contest ended as a bipolar one between the Aam Aadmi Party and the Bharatiya Janata Party.

This humiliating defeat in Delhi does not bode well for the party with Bihar and West Bengal assembly polls slated later this year.

The Delhi results might have a negative effect on Congress prospects in upcoming assembly elections, where it has improved its position by bringing more states under its ambit with the help of allies. IMAGE: The Congress Delhi office bears a deserted look after its dismal performance in the polls. Photograph: Manvender Vashist/PTI Photo

Congress chief spokesperson Randeep Surjewala said the party's defeat in Delhi is disappointing but claimed that 'we have, however, not lost the battle'.

"The Congress party will go back to the drawing board, recalibrate its policy and strategy and build a new fresh leadership from the grassroots up. We are determined to raise people's voice in Delhi as a responsible opposition and stakeholder in the progress of the national capital," Surjewala told PTI.

He added that Delhi polls have taught a lesson to political parties as to how a national party should not conduct a venomous, hate campaign.

"It is a rejection of the politics and leadership of both Prime Minister Narendra Modi and Amit Shah for the vision and vitriolic poll campaign of shooting people, electrocuting them and dividing them, has been decimated by Delhi voters," he said.

Congress leader P Chidambaram said AAP's win is a 'booster for the confidence' of the Opposition that the BJP can be defeated in every state.

He said people of Delhi have defeated the 'polarising, divisive and dangerous' agenda of the BJP.

Chidambaram said the Delhi vote was close to an all India vote than to a state-specific vote as the national capital is a 'mini India'.

"Remember, when Delhi voted, millions of Malayalees, Tamils, Telugus, Bengalis, Gujaratis and people who came from other states of India voted. If the voters represent the views of the states they came from, the Delhi vote is a booster for the confidence of the Opposition that the BJP can be defeated in every state," he said.

The Congress contested the polls this time in alliance with the Rashtriya Janata Dal, fighting on 66 seats and leaving four for its ally.

On how the Delhi poll will affect the party prospects, Surjewala said the 'Congress party is determined to wrest Bihar all over again from the hands of the NDA and become a political force in coming elections in West Bengal'.

As Delhi results came in, criticism of the Congress' Delhi unit started gaining traction and many leaders called for 'action' rather than introspection.

'We are again decimated in Delhi. Enough of introspection, time for action now. Inordinate delay in decision making at the top, lack of strategy and unity at state level, demotivated workers, no grassroots connect-all are factors. Being part of the system, I too take my share of responsibility,' Delhi Mahila Congress chief and party spokesperson Sharmishtha Mukherjee said in a tweet. 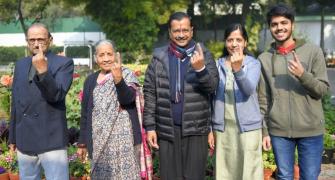 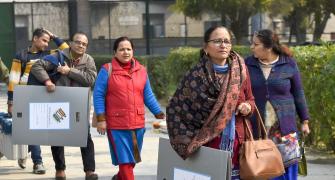 Will it be an AAP sarkar in Delhi? LEADS/RESULTS