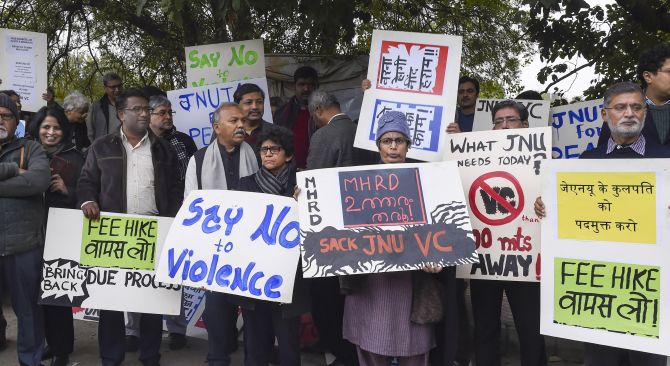 A fact-finding committee of the Congress on the Jawaharlal Nehru University violence on Sunday alleged that Vice Chancellor M Jagadesh Kumar was the 'mastermind' behind it and sought his immediate dismissal and criminal investigation against him.

Calling the January 5 violence by masked men 'state-sponsored', panel member Sushmita Dev said it recommended that Kumar be dismissed immediately and all appointments in faculty should be probed and an independent inquiry should take place.

The Congress had appointed a four-member fact-finding committee to carry out a detailed inquiry into the violence at the JNU.

"A criminal investigation must be initiated against the VC, the company that provides security service and members of the faculty who conspired with the attackers to unleash the violence at Sabarmati hostel, Periyar hostel and other places.

"The security company's contract must be immediately terminated," the Mahila Congress chief said.

Calling Kumar the 'mastermind' behind the incident, Dev said since his appointment in 2016, he meticulously 'infiltrated' the university with people in the faculty who did not merit their positions and promoted only those who would be compliant to him and had their inclination to right-wing ideology.

He operates through these members of faculty to orchestrate chaos on campus.

The crisis on the campus is a culmination of his misgovernance and autocracy. He deliberately imposed his decision on the university students and teachers without due process and then refused to engage with the duly elected student and teacher representatives which led to the deadlock, she added.

"It is clear that the attack on JNU campus was state-sponsored," Dev said.

The other recommendations of the committee included an independent judicial inquiry into the events of January 5 that led to violence on the campus of Jawaharlal Nehru University.

"Fix accountability of the Commissioner of Delhi Police and other police officials because of police failure to act on the emergency calls by the students and faculty members and in light of the overwhelming prima facie evidence that they facilitated the criminal elements on campus," the committee said.

She also demanded a complete rollback of the JNU fee hike.

"Immediate rollback of the fee hike as implemented by the university authorities and recognition of Jawaharlal Nehru University Students' Union (JNUSU) as an elected body so that proper consultation can take place between the administration and the students on the fee and other issues," she added.

She said there is every reason to believe that the mob that attacked the students and teachers on campus were from the right-wing factions.

"There is sufficient evidence to show that the people who were attacked on 5th January at Sabarmati hostel and at the Sabarmati-T junction just outside the hostel were people who did not belong to the right-wing politics on campus.

"The attackers in fact did not touch the students and faculty who were right-wingers at the Sabarmati hostel area," she added.

"The mob that entered the hostel even targeted people of a certain religion and spared those who were well known ABVP activists," she said.

"I have no doubt that the violence is pre-planned, pre-mediated, criminal conspiracy," she told reporters.

"The quality of the investigation is questionable where till now a case for attempt to murder has not been filed despite serious head injuries suffered by students and faculty. As per the students, the forensic team came about 40 hours later to the hostel that was attacked," she said.

Leftist outfits and the Rashtriya Swayamsevak Sangh-affiliated Akhil Bharatiya Vidyarthi Parishad blamed each other for the violence. 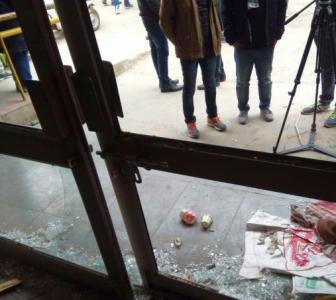 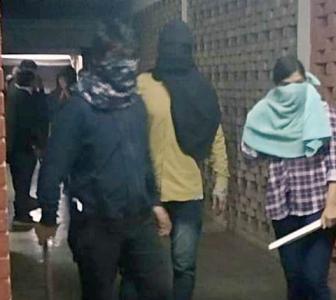 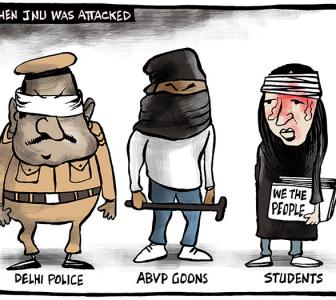 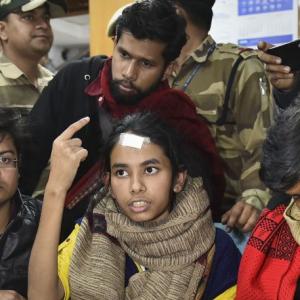 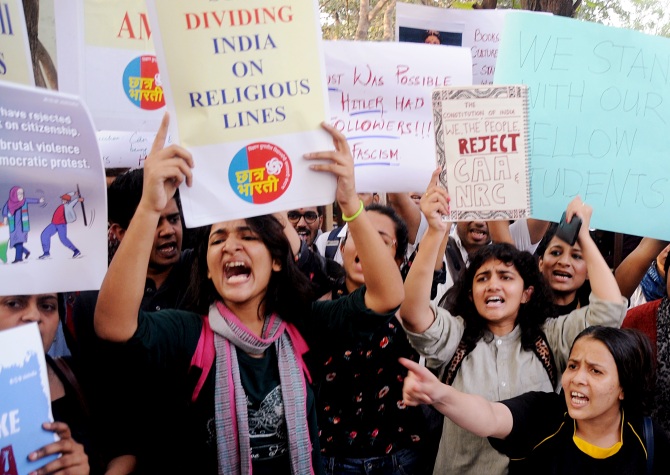