Chief Justice of India NV Ramana took path-breaking judicial and administrative decisions that included putting the sedition law on hold, reviewing the money laundering verdict, ordering probes into Pegasus snooping and Lakhimpur Kheri cases and ensuring appointments of record 11 judges in the top court and over 220 in high courts. 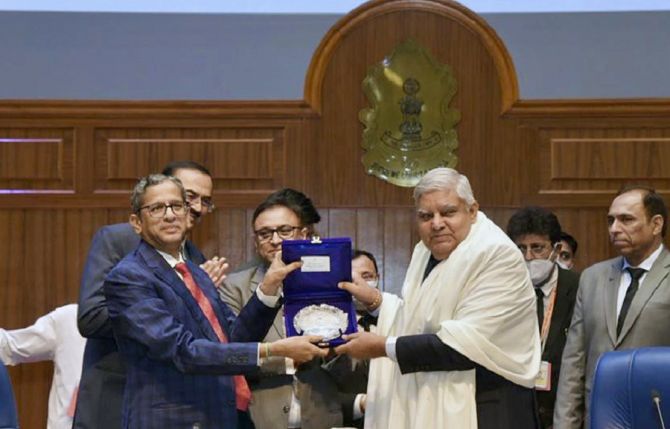 On his last day in the office, the 48th CJI got one more feather in his cap by ensuring live streaming of Supreme Court proceedings of the ceremonial bench headed by him by implementing the 2018 verdict which had allowed such webcasts.

Hailing from an agriculturist family in Ponnavaram village of Andhra Pradesh's Krishna district, Justice Ramana had succeeded SA Bobde on April 24, 2021 with a dire situation of huge unfilled vacancies in the top court and the high courts staring at the face of the judiciary.

The apex court had not got a single judge after the superannuation of the then CJI Ranjan Gogoi on November 17, 2019 and had nine existing vacancies when CJI Ramana took over and the high courts had around 600 vacancies.

Creating a record, the CJI headed apex court collegium meetings led to appointment of 11 Supreme Court judges with nine of them, including three women, appointed in one go.

Justice Ramana recommended 224 names from several bars and the judicial services for judgeship in high courts, besides ensuring uninterrupted functioning of courts during pandemic.

He also ensured nearly 100 appointments of presiding officers, technical and legal members in tribunals across the nation.

The CJI, in May, came up with a historic order and put the colonial era penal law on sedition on hold by directing the Centre and the states not to register any cases for the offence pending review of the provision.

He had taken note of misuse of sedition law and had issued notices to the Centre and questioned the need for colonial-era penal provision which was used to persecute the freedom fighters.

A day before retiring, the CJI-led bench took up several important cases including the plea of Karti Chidambaram and decided to review in open court the controversial verdict which upheld the Enforcement Directorate's powers under the Prevention of Money Laundering Act.

The CJI also led a special bench and issued notices to the Gujarat government on a plea challenging release of 11 convicts in the 2002 case of Bilkis Bano's gangrape and murder of her family members.

It also took note of the findings of the report of a committee, which probed the security breach during Prime Minister Narendra Modi's visit to Punjab in January, holding that the Ferozepur SSP failed to discharge his duty though sufficient force was available. The CJI referred the report to the Centre for taking action.

On August 23, the CJI, in a verdict, held that Benami Transactions (Prohibition) Amendment Act, 2016 does not have retrospective application and authorities cannot initiate or continue prosecution or confiscation proceedings for transactions entered into prior to the coming into force of the legislation.

The verdict also struck down section 3(2) and section 5 of the Act by terming them "vague and arbitrary".

Justice Ramna-led benches ordered probes into the allegations of use of Israeli spyware by agencies for targeted surveillance of politicians, journalists, and activists and in the Lakhimpur Kheri violence in which eight people including four farmers were killed in October last year.

He led the judicial intervention to halt the anti-encroachment demolition drive post communal riots in Jahangirpuri here has been hailed by many.

His efforts led to the increase of Telangana High Court bench strength from 24 to 42 judges.

At the outset of his tenure, the CJI, who was part of the selection panel along with the prime minister and the leader of the opposition to select the CBI Director, invoked the apex court judgement leading to the appointment of S K Jaiswal as the head of the probe agency.

His suo-motu cognisance of delay in the release of prisoners from Agra prison based on newspaper reports led to the launch of a software platform 'FASTER' for instantaneous delivery of court orders to prisons across the country.

The CJI has been hailed by many for his observations, judicial and administrative actions like re-recommending the name of senior lawyer Saurabh Kirpal, a gay, for elevation as a judge to the Delhi High Court.

Justice Ramana was elevated as the Chief Justice of Delhi high court on September 2, 2013, and was appointed as a judge of the Supreme Court on February 17, 2014.

Justice Ramana will be succeeded by Justice Uday Umesh Lalit as the CJI who will have a tenure of a little over two months.

Justice Lalit's retirement in November will pave the way for Justice D Y Chandrachud to take over as head of the judiciary for a term of a little over two years.

Sanjeev Kumar in New Delhi
Source: PTI© Copyright 2023 PTI. All rights reserved. Republication or redistribution of PTI content, including by framing or similar means, is expressly prohibited without the prior written consent.
Print this article 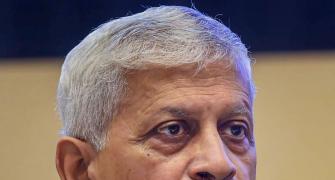 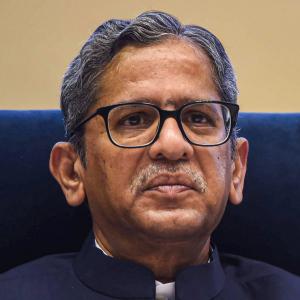