At least five civilians were injured in yet another hand grenade explosion in south Kashmir town of Bejibehara, 45 kms from Srinagar on Wednesday afternoon.

Wednesday's grenade explosion came a day after a string of militant attacks in which four security men were injured.

A senior police officer said, militants hurled a grenade at a police party which, however, missed the target and exploded outside a shop on the road wounding five civilians in Bejibehara town.

The explosion triggered panic and tension in the town situated on the Srinagar-Jammu national highway. No group has yet claimed responsibility for the explosion.

The grenade attack comes a day after a series of similar attacks targeting security forces were carried out in Srinagar and south Kashmir's Shopian district. No militant outfit has so far claimed responsibility for the latest attack, which sparked panic among people in the highway town.

Police assisted by paramilitary forces immediately cordoned off the spot but no one has been arrested so far, the sources said.

Suspected militants on Tuesday carried out twin grenade attacks in Srinagar injuring three CRPF jawans. They also shot at and injured a policeman in Anantnag district town besides making an abortive attempt to target a police party with a grenade in Shopian district.

Police on Wednesday said that they had on Tuesday evening arrested two militants of Pakistan-based Lashkar-e-Tayiba (LET) outfit who were allegedly tasked to carry out fresh grenade attacks.

Bilal Ahmad Mir and Javid Ahmad Mir were arrested and two grenades seized from them at a checkpoint on Court Road in Sopore town, Superintendent of Police, Sopore, Imtiyaz Hussain told PTI. 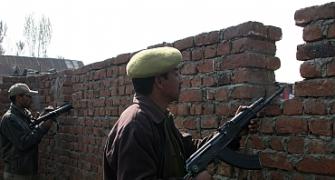