China is pursuing a major military build up in a "secretive manner" developing survivable nuclear delivery system, a 1,500-km range anti-ship missile to hit aircraft carriers and has the most active land based ballistic and cruise missile programme in the world, Pentagon has said.

Beijing is acquiring 'capabilities' to strike from a distance, warned the US Defence department, saying these moves "increases the potential of misunderstanding" and military conflict with other nations.

In worrying new assessment, Pentagon said Beijing had developed missiles capable of striking targets in space and is also expanding its fleet of conventional and nuclear submarines to give it forces global reach.

The annual Congressional-mandated report by the Pentagon expressed concern about the lack of transparency from China into the force projection and anti-access, area denial capabilities it is acquiring.

In 2009 alone, the Pentagon said China's military-related spending was $150 billion. While some of the increasing Chinese capabilities have been put to positive use, like humanitarian and anti-piracy efforts, the report says, China's continued effort to be able to sustain military operations far from its shore was a cause of concern to the US military. But, it said China had still limited ability to sustain military power at a distance.

"They are fast catching up," the report said, by developing an anti-ship ballistic missile that has a range in excess of 1,500 km, which is intended to provide the Peoples Liberation Army with the capability to attack ships, including aircraft carriers in the Western Pacific.

According to the report, "China has the most active land-based ballistic and cruise missile program in the world. It is developing and testing several new classes of offensive missiles, qualitatively upgrading certain missile systems and developing methods to counter ballistic missile defenses," a Pentagon official told journalists.

China's active ballistic and cruise missile development programme also extends to the area of its nuclear force modernisation, where China appears to be focusing on developing more survivable delivery systems, he said.

"Turning to the maritime realm, the PLA navy has the largest force of principal combatant submarines and amphibious warfare ships in Asia. China continues to invest heavily in undersea warfare with a mixture of nuclear-powered submarines and conventionally powered diesel electric boats.

This is complemented by investment in new surface combatants designed to improve the PLA navy' capability and capacity for anti-surface and anti-air warfare," the official said. "In the South China Sea, China's primary interests are related to securing its extensive sovereignty claims and exploiting natural resources. A stronger military presence in the region would also position it for force projection, blockade and surveillance operations to influence critical sea lanes," the official said.

"China still has much work to do to translate its aspirations into operational capabilities, but we note that China is in fact working to translate those aspirations into operational capabilities," the official said.
Related News: South China Sea, Pentagon, Peoples Liberation Army, US Defence department, PLA navy
SHARE THIS STORY
Print this article
Document leak: America scrambles to save face
US not prepared to deal with nuke attack: Pentagon
Pentagon backs US cos for Indian jet deal 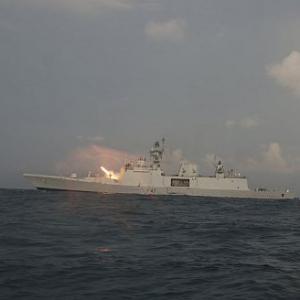 Why India and its navy must venture into open seas 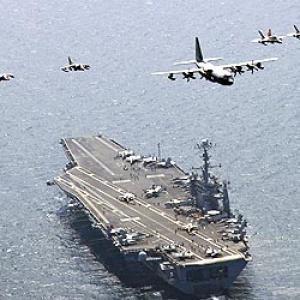