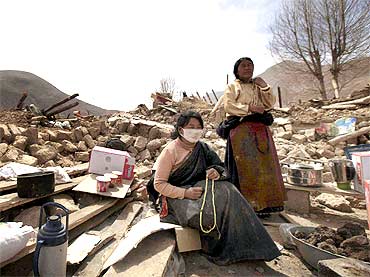 Five days after the devastating earthquake in northwestern China, rescuers on Monday pulled out a four-year-old girl and an elderly Tibetan woman alive under the rubble of a collapsed building, even as the death toll rose to 1,944.

68-year-old Wujin Cuomao and the young Cairen Baji had been trapped for more than 123 hours when rescuers finally managed to pull them out alive in Jiegu, which was the worst hit town in the Qinghai province.

Relatives kept the duo alive by sending them food and water through gaps in rubble with the help of bamboo poles, the official China Central Television reported. It aired the footage of the duo being taken out of the rubble.

Officials put the death toll from the 7.1 magnitude quake at 1,944 and the injured at 12,135. Official Xinhua news agency said out of the injured, 1,434 are in serious condition.

Convoys of military trucks, civilian aid vehicles and ambulances headed to the worst quake-hits areas on the Tibetan plateau.

The rush for tents and relief goods increased with hundreds of people lining up at the relief centres as the extreme cold weather persisted.

A geological reconnaissance to turn the quake-hit area into a 'plateau ecological tourist centre' by relocating the towns was carried out on Monday.

The framework plan is getting ready to turn the quake-devastated township into 'a plateau ecological tourist city,' the provincial government of Qinghai announced today.

A team of 16 experts from the ministry of housing and urban-uural development and the provincial housing bureau were conducting a field study of the quake zone, Xinhua reported.

Image: Tibetan women rest amid the ruins of their destroyed house in the earthquake-hit Gyegu town in Yushu County, Qinghai province on Sunday | Photograph: Reuters

Source: PTI© Copyright 2020 PTI. All rights reserved. Republication or redistribution of PTI content, including by framing or similar means, is expressly prohibited without the prior written consent.
Related News: China Central Television, Vivian Hsu, Xinhua, Qinghai, Wujin Cuomao
SHARE THIS STORY
Print this article
Is China sympathetic to the Maoists? 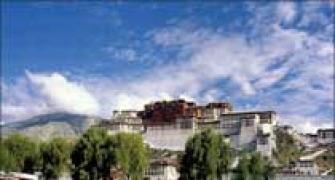 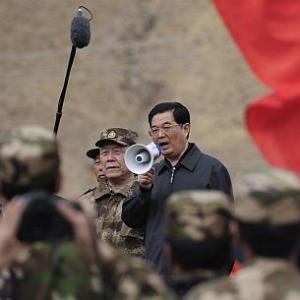 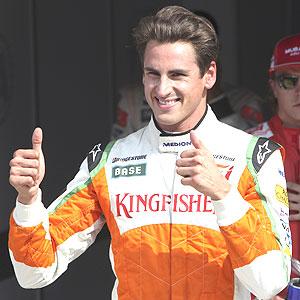