Chidambaram appeals to Nagas to withdraw blockade in Manipur

Home Minister P Chidambaram on Wednesday appealed to the agitating Nagas, who are blocking two National Highways passing through Manipur, to withdraw their strike and come forward for dialogue.

Addressing a meeting, Chidambaram requested the Naga community to forget the past and come to the negotiating table to discuss their problems in an atmosphere of mutual trust for better future as blockade of highways would not help anyone.

He inaugurated a mini-secretariat at the Senapati district headquarters town and appealed to the people to settle all issues through dialogue.

Meanwhile, a spokesman of the United Naga Council said the economic blockade on NH-39 and NH-53, which has been going on since August 21 hitting supply of essential commodities, would continue and called a three-day bandh in the state from midnight on Thursday to protest the government's assurance of turning the Sadar Hills area in Senapati into a separate district.

The Sadar Hills District Demand Committee had withdrawn its 92-day economic blockade on the two national highways on the midnight of October 31 following assurance by the state government that their demand for conversion of Sadar hills area in Senapati district into a district would be looked into.

In his address, Chidambaram said the Central government would continue to provide funds for the development of the people of northeast. 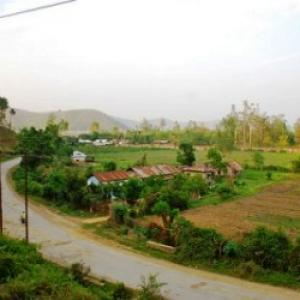