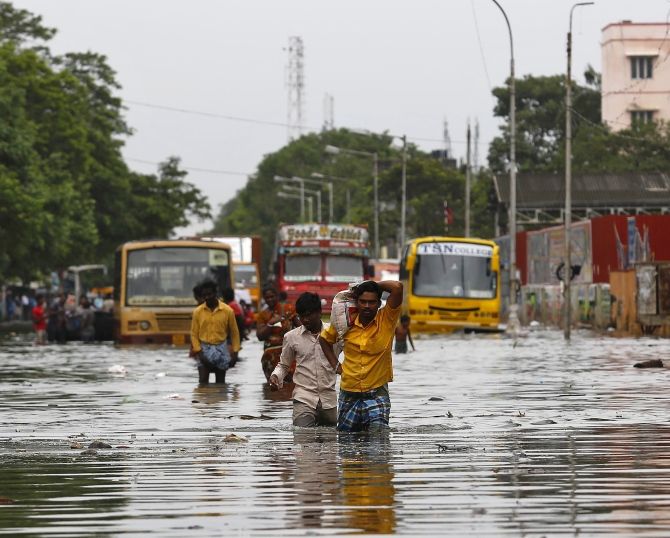 Flood-ravaged Chennai and its suburbs enjoyed further respite from rains on Saturday but residents battled scarcity and high prices of essential commodities even as communication and train services were partially restored and day-time air services are to resume on Sunday.

Announcing the start of day-time domestic commercial operations, the Airports Authority of India said on Saturday night that decision on night operations would be taken on Sunday.

Only technical flights and ferry services were operated on Saturday. However, intermittent rains and an overcast sky kept the people on their tenterhooks while waters receded in a number of areas.

The Regional Meteorological Centre has forecast light rains in the next 24 hours for the city and suburbs. Director, Area Cyclone Warning Centre, S R Ramanan told media persons that heavy rains were possible in the coastal and southern districts of the state. He has advised fishermen of southern coastal districts against venturing into sea for fishing.

At least 245 people have died in rain-related incidents since October one. The worst-hit city and suburbs and Kanchipuram and Tiruvallur districts took a pounding on Tuesday when a large number of areas were flooded.

In a big relief to the hapless residents, supply of milk and vegetables picked up pace but there were complaints of scarcity in several places coupled with high prices for essentials.

Mobile phone and internet services were getting restored in a staggered manner in several parts of the city. Several areas complained of continued power outage.

Meanwhile, Army Chief General Dalbir Singh undertook an aerial survey of the worst flood hit areas here and assured that troops would continue to take up rescue efforts till such time it was needed by the State.

"Chief of army staff has assured the troops will continue rescue efforts till needed by the civil administration", an official release said.

He said more troops, equipment and medical teams would be made available "as required". The army has rescued up 5,500 affected people and shifted them to safer places, the release said.

Also, electricity supply which was withdrawn to almost all parts of the city is now getting restored in phases. Allaying fears, IOC said there was "no fuel or LPG shortage" in the city and all efforts were being made to effectively dispense fuel. Water-logging hampered dispensing fuel, it was said.

State-run Aavin said it was taking adequate measures to step up milk supply and asserted that supplies would get fully restored by Sunday. Though flood waters have receded in major roads, inundation continued in several other areas hampering movement of vehicles and inconveniencing pedestrians.

According to the state government, as many as 3,50,000 people have been rescued and moved to safer places since the commencement of the northeast monsoon in October.