A portion of the Nanda Devi glacier broke off in Uttarakhand's Chamoli district on Sunday, triggering an avalanche and a deluge in the Alaknanda river system that washed away hydroelectric stations, leaving at least seven people dead and 125 missing who are feared dead. 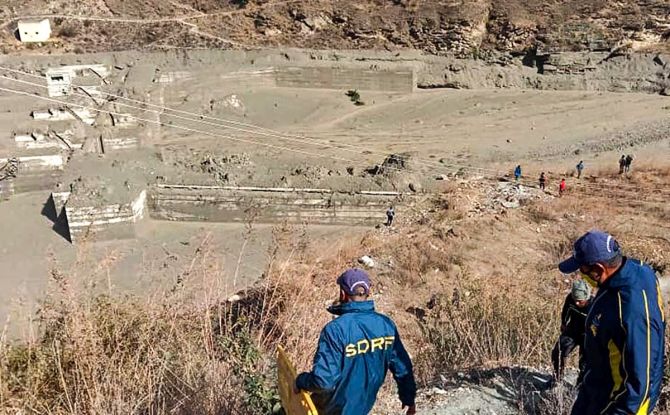 IMAGE: Damaged dam of the Rishi Ganga Power Project, after a glacier broke off in Joshimath in Uttarakhand’s Chamoli district causing a massive flood in the Dhauli Ganga river, on Sunday. Photograph: PTI Photo

The sudden flood in the middle of the day in the Dhauli Ganga, Rishi Ganga and Alaknanda rivers -- all intricately linked tributaries of the Ganga -- triggered widespread panic and large-scale devastation in the high mountain areas.

Two power projects -- NTPC's Tapovan-Vishnugad hydel project and the Rishi Ganga Hydel Project -- were extensively damaged with scores of labourers trapped in tunnels as the waters came rushing in.

Sixteen men were rescued safely from a tunnel in the Tapovan project but about 125 were still missing.

As night fell in the ecologically fragile Himalayas and rescue work in the difficult to access areas became more difficult, there were fears they may be dead. IMAGE: ITBP personnel dig to open Tapovan Tunnel which was completely blocked after the glacial broke off. Photograph: PTI Photo

Homes along the way were also swept away as the waters rushed down the mountainsides in a raging torrent.

There were fears of damage in human settlements downstream, including in heavily populated areas.

Many villages were evacuated and people taken to safer areas.

By evening, it became clear that downstream areas were safe. A 13.2 MW small hydro project on the Rishi Ganga was swept away in the glacier burst but there was no danger of floods in downstream areas as the water level had been contained, the National Crisis Management Committee (NCMC), headed by Cabinet Secretary Rajiv Gauba, was informed at an emergency meeting in the national capital.

The NCMC was also told that people trapped in project tunnel were rescued by the Indo Tibetan Border Police (ITBP) while efforts were on to rescue those trapped in another tunnel. The operation was coordinated by the Army and the ITBP, an official spokesperson said.

The flood also affected the downstream hydro project of NTPC at Tapovan on the river Dhauli Ganga, the spokesperson said.

There is also no threat to neighbouring villages, according to information given by the Central Water Commission (CWC).

Connectivity with some border posts was "totally restricted" due to a bridge collapsing near Reni village, close to the project site, an ITBP spokesperson said. 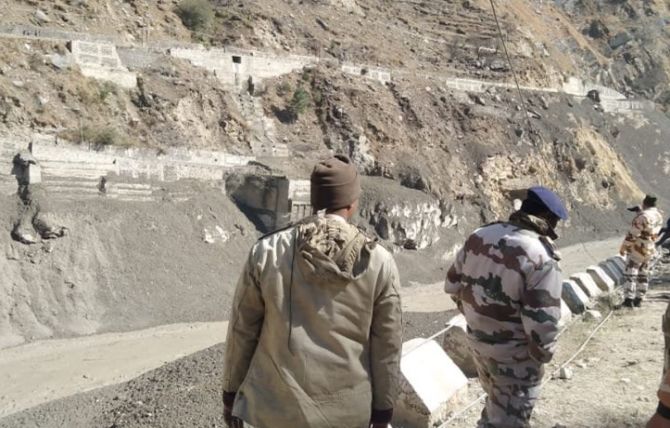 The border guarding force has units based in Joshimath,a short distance away, and managed to reach the spot within an hour of the first alert at about 10.45 am.

Several districts, including Pauri, Tehri, Rudraprayag, Haridwar and Dehradun, were put on high alert and forces of the ITBP and the National Disaster Response Force (NDRF) rushed in to help with the rescue and relief effort. The personnel were seen rappelling down steep mountainsides to aid in the rescue work.

Groups of people were seen sitting along the high altitude roads, waiting for news of their loved ones.

As details of the disaster came in, President Ram Nath Kovind said he was deeply worried about the massive glacier burst at Joshimath, about 295 km from Dehradun.

'Praying for wellbeing and safety of people. Am confident that rescue and relief operations on ground are progressing well,' he tweeted. 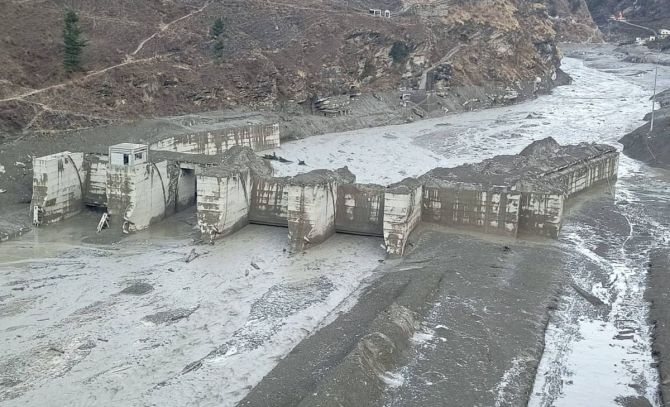 Prime Minister Narendra Modi said he was constantly monitoring the situation in the state.

"India stands with Uttarakhand, prays for everyone's safety," he said.

Addressing a rally in West Bengal later in the day, he assured all help in fighting the calamity and said he was in constant touch with the Uttarakhand chief minister and Home Minister Amit Shah on the rescue and relief efforts being carried out.

Shah also spoke to Rawat and assured him of all possible support to deal with the situation arising from the glacier burst and the resulting floods.

In a series of tweets in Hindi, Shah said teams of the NDRF were deployed for rescue and relief operations of the affected people while additional troops of the force were 'being airlifted from Delhi'.

'I have spoken to Chief Minister @tsrawatbjp ji, DG ITBP and DG NDRF regarding the natural disaster in Uttarakhand.

'All the concerned officers are working on a war footing to secure the people. NDRF teams have left for rescue operations. Every possible help will be provided to 'Devbhoomi',' he said. Shah said the central government is constantly monitoring the situation in the state.

"Some more teams of NDRF are being airlifted from Delhi and sent to Uttarakhand. We are constantly monitoring the situation there," he said.

A home ministry spokesperson said four NDRF teams (about 200 personnel) were airlifted to Dehradun and would head to Joshimath.

One column of the Engineering Task Force (ETF) of the Army, with all rescue equipment, has been deployed.

The chief minister also appealed to people to not spread rumours through old flood videos.

At the NCMC meeting, concerned agencies of the central and the state governments were asked to keep a strict vigil on the situation.

A team from the DRDO, which monitors avalanches, was being flown in for surveillance and reconnaissance. Besides, NTPC managing director was asked to reach the affected site immediately.

Two teams of the NDRF were sent and three additional teams flown in from Hindon airport in Ghaziabad. The troops are expected to reach the affected region tonight.

Indian Navy divers are also being flown in and aircraft and helicopters of the Indian Air Force (IAF) are on standby, the spokesperson said.

In some good news, the India Meteorological Department informed that there is no rainfall warning in the region for the next two days.

News that about 150 labourers were affected had come in the early in the day.

"Representatives of the power project have told me that they are not being able to contact around 150 of their workmen at the project site," said State Disaster Response Force DIG Ridhim Aggarwal.

The waters in the Dhauli Ganga was flowing two to three metres above normal, the official added. 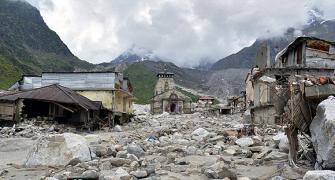 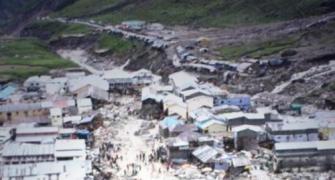 In Uttaranchal, the disaster has been in the making 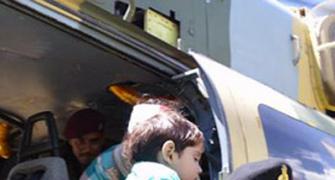 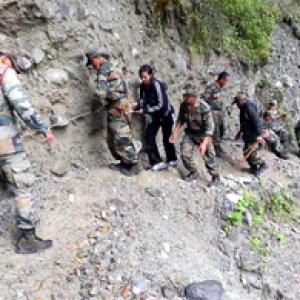 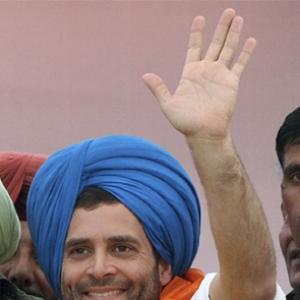