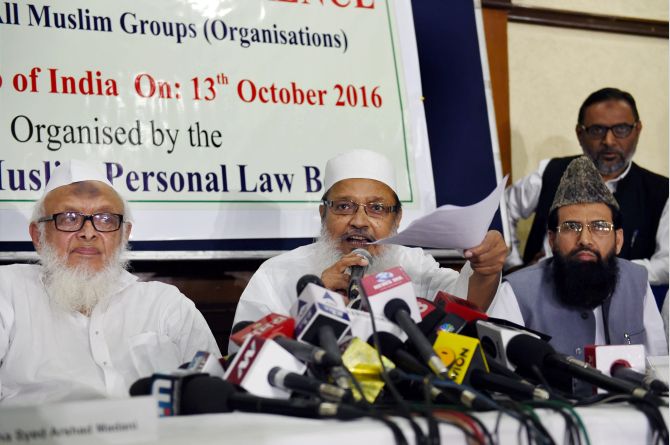 The Centre on Friday rebuked the All India Muslim Personal Law Board for trying to ‘politicise’ the law panel’s move to seek feedback on uniform civil code and said it should not be linked to ‘triple talaq’, where the core issue is gender justice and ending discrimination against women.

Calling for an 'enlightened debate' on Uniform Civil Code, Information and Broadcasting Minister M Venkaiah Naidu said the ‘real mood’ of the country was to end triple talaq and some people were trying to create confusion over the two issues.

“You (All India Muslim Personal Law Board) join the debate. Let there be enlightened debate you put forth your point of view. Let a consensus be evolved. Why are you trying to bring in the name of the prime minister and call him dictator,” Naidu told reporters.

The government’s sharp reaction came a day after the AIMPLB and various other Muslim organisations announced that they will boycott Law Commission’s process to take views on the contentious Uniform Civil Code. They said the move amounted to the Modi government declaring ‘war’ on their religious rights and that UCC will ‘kill’ India’s pluralism.

Naidu said some people were confusing the issue of triple talaq with Uniform Civil Code.

“The real mood of the country is that people want this triple talaq to end. People do not want any discrimination on basis of any religious faith against women. As I told you the issues are gender justice, non-discrimination and dignity of women,” he said.

Criticising AIMPLB, Naidu even said, “If you are so interested in making political comments you can as well join any political party of your choice. This is not expected from Muslim Personal Law Board and other religious leaders.”

“You have to confine yourself to the issue and the issue is put forth for discussion by the law commission,” he added.

Naidu said the Law Commission wants a thorough discussion on UCC and if the AIMPLB does not want to participate in the debate, it was their choice.

“If you don’t want to react, do not want to respond, it is your choice but you do not pose yourself as you are the champion and other’s views have no relevance. Do not try to convert this into a political debate,” he said.

About the issue of triple talaq, he said the Law Commission wanted the views of all stakeholders.

“They wanted this issue to be debated, discussed and all the religious leaders, social workers, prominent public personalities need to acknowledge the basic principle of equality of all human beings -- men or women and work in that direction.

“Instead of misleading people some people are trying to confuse the issue of triple talaq with the common civil code,” said Naidu.

He further said Uniform Civil Code is enshrined in Article 44 of the Directive Principles of the Constitution and not brought in by the National Democratic Alliance government or Prime Minister Narendra Modi.

“There is nothing wrong in discussing about it (UCC) and nothing is going to be forced on people. If something is done, then it will on the basis of consensus and agreement within the community,” he said.

He further added, “The government definitely wants a debate across the country. There are three basic issues gender justice, non discrimination and third is dignity of women. In democracy, everybody has got a right to express their views.”

Addressing a press conference here yesterday, the AIMPLB members and representatives of Muslim organisations had contended that the the UCC, if implemented, will paint all people in ‘one colour’ which will threaten the country’s pluralism and diversity.

Trashing government's stand on the issue of triple talaq, the outfits claimed the community has reported lesser number of divorce cases vis-à-vis other communities, especially the Hindu community which, they said, has reported higher divorce ratio according to Census 2011.