A group of former civil servants have written an open letter to Prime Minster Narendra Modi expressing dismay over the central vista redevelopment project, which, they alleged, has been "marked by a degree of executive highhandedness" from its very inception. 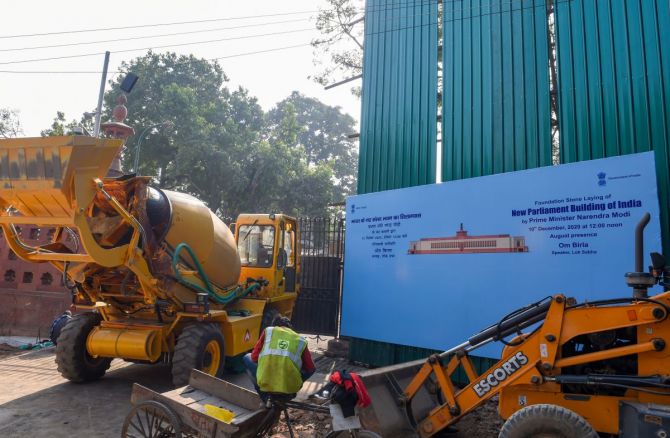 IMAGE: Kindly note that this image has been used for representational purposes only. Photograph: Shahbaz Khan/PTI Photo

The 69 retired bureaucrats, under the aegis of Constitutional Conduct Group, claimed that the country's public health infrastructure was crying out for investment and asked why this "wasteful and unnecessary project must take precedence over social priorities like health and education".

"Notwithstanding the specious reasoning as to why a new Parliament building is at all necessary, it is a matter of great dismay that at a time when we are faced with an economy in perilous decline and a pandemic which has brought untold misery to millions, the government has chosen to invest vast sums on a project which represents nothing but the pursuit of pomp and grandeur," they said.

The central vista redevelopment project in the heart of the national capital envisages construction of a new Parliament complex, government buildings for central ministries, a new enclave for the vice president and a new prime minister's office and residence among others.

The Central Public Works Department, which is executing the project, has revised its estimated cost from Rs 11,794 crore to Rs 13,450 crore.

"We are writing to you today to convey our dismay at the manner in which your government, and you, as its head, have chosen to completely disregard the rule of law in the matter of the Central Vista Redevelopment project. This project, from its very inception, has been marked by a degree of executive highhandedness rarely witnessed before," alleged the letter.

"Of particular concern is the manner in which environmental clearances were obtained for a plan which treats the green spaces and the built heritage of the central vista as an unnecessary hurdle to the achievement of objectives driven by monumental ambition," it further alleged.

The former civil servants also wondered what locus standi the prime minister has to lay the foundation stone of the Parliament building.

"The prime minister is the head of the executive, not of the legislature. For a building that will accommodate the two Houses of Parliament, the appropriate protocol would have been for the President of India to lay the foundation stone. This was a clear instance of breach of constitutional propriety," the letter alleged.

Modi had on December 10 laid the foundation stone of the new Parliament building.

The signatories also alleged "brazen impropriety" in going ahead with the construction of the new Parliament building while the matter is still sub judice. 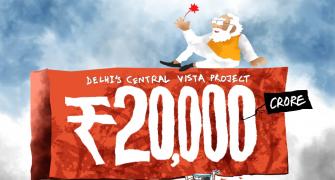 Any change in Central Vista will be at govt's risk: SC