The estimated project cost of the executive enclave which will house a new prime minister's office (PMO) has gone up by over Rs 100 crore to Rs 1,316 crore as the CPWD floated a fresh tender cancelling its earlier one, according to the agency's bid document. A central public works department official said the increased scope of work under the project, including additional information and communication technologies components, has led to a marginal rise in the estimated cost.

In its earlier tender, the CPWD had estimated the cost of construction and maintenance of the Executive Enclave at Rs 1,160.17 crore.

Ahluwalia Contracts India Limited had emerged as the lowest bidder, quoting around 1,119 crore for the project.

Apart from the PMO, the executive enclave will house the Cabinet Secretariat, India House and the National Security Council Secretariat.

India House will be used as a conference facility like the Hyderabad House where high-level talks, especially with top visiting leaders of various countries, are currently held.

According to the new bid document issued earlier this week, the project's estimated cost for construction and five-year maintenance contract is Rs 1,316 crore.

Potential bidders can submit pre-qualification documents by June 8 and the contractor will have to complete the work within 24 months, it states.

The total plinth area of the project is 85,282 square metres. According to the agency, 38 watch-towers, active component of ICT and about seven entry and exit gates along with complete security systems were added the list of works.

The new PMO will have three floors having a floor height of 4.75 metres, in addition to the basement and ground floor, and the new Cabinet Secretariat and NSCS will have the same building structure.

The executive enclave will come up on the south side of the South Block in plot number 36/38 in the high-security Lutyens' Delhi.

Tata Projects Limited is constructing a new Parliament building. In October last year, Larsen & Toubro Limited had been awarded the contract for the construction and maintenance of the first three buildings of the Common Central Secretariat.

Shapoorji Pallonji and Company Limited is executing the redevelopment work of the Central Vista Avenue stretching from Vijay Chowk to the India Gate.

The redevelopment of the Central Vista, the nation' power corridor, envisages a new parliament building, a common central secretariat, revamping of the 3-km Rajpath from the Rashtrapati Bhavan to the India Gate, new office and residence of the prime minister, and a new vice-president enclave. 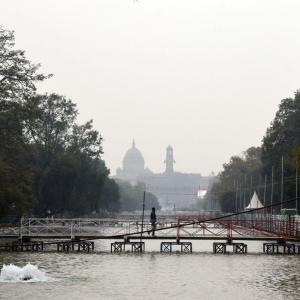