Unnao accident: Sengar, 9 others including minister's kin booked for murder

The Central Bureau of Investigation has booked Uttar Pradesh Bharatiya Janata Party MLA Kuldeep Singh Sengar and nine others on murder charges in connection with the truck-car collision that left the woman who had accused the legislator of rape critically injured, officials said on Wednesday.

The son-in-law of a UP minister is among the 10 booked for murder in the case. 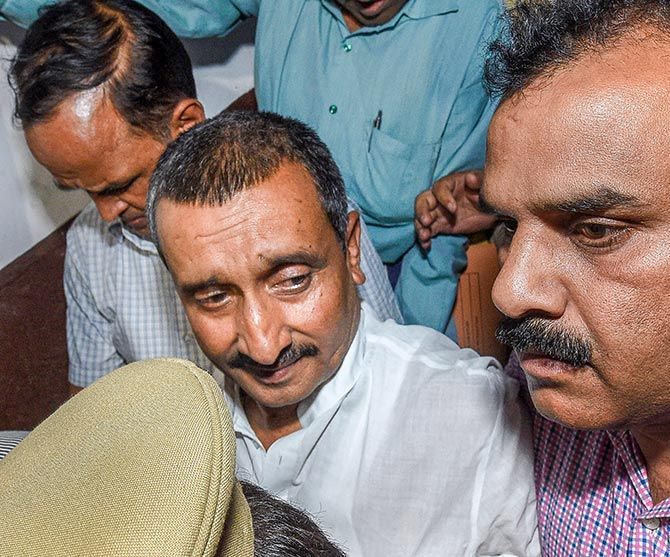 A special team formed by the agency to probe the case reached the accident site in the Gurubakshganj area of Uttar Pradesh's Rae Bareli district.

A speeding truck hit the car in which the rape victim was travelling from her home in Unnao to Rae Bareli on Sunday, killing two relatives and leaving her and a lawyer critically injured.

"The CBI has constituted a team for speedy and smooth investigation of the case," the agency's spokesperson said in New Delhi.

The team inspected the crime scene, the truck which had hit the white Maruti Swift car.

The accident took place when the woman, who has accused the BJP MLA of raping her when she was a minor on the pretext of arranging a job for her, was returning after meeting her uncle lodged in the Rae Bareli prison.

The BJP claimed that it had suspended the MLA from the party after the allegations surfaced last year.

The CBI, which is probing the rape case as well, has already filed a charge sheet against the MLA and his kin.

The number plate of the truck, which was coming from the opposite direction on the wrong side, was smeared with black paint, according to eyewitnesses.

The CBI team also spoke to police officers who were the first respondents after the accident was reported.

The team will also record statements of the police officers in the security cover of the woman and will seek their responses why they did not accompany the victim on Sunday when the accident took place, agency sources said.

According to normal procedure, the CBI has taken over the investigation into the case from the Uttar Pradesh Police by re-registering its FIR.

The accident FIR was first registered by the UP Police on a complaint by the victim's uncle, who is lodged in the Rae Bareli prison.

After woman accused Sengar of raping her,  her uncle was slapped with multiple false case by people close to Sengar. The police had arrested her uncle and he was transferred to Rae Bareli prison.

"It was alleged that the accused persons were conspiring, threatening and harassing the family of the complainant. It was further alleged that in this matter, the accident that occurred on July 28, 2019 has resulted in loss of two lives.

"Also the Unnao victim and the family lawyer(both passengers in a car) are still under treatment at a hospital in Lucknow," the CBI spokesperson said.

In the FIR, her uncle had alleged that the family was under constant pressure from the kin of Sengar.

They had been threatening to kill the entire family if the case against him was not withdrawn, he alleged.

He also alleged that false cases have been slapped against him for not yielding to the pressure and he has been transferred to Rae Bareli prison where threat to his life looms.

He said he has all the evidence against the political strongman accused of raping his niece at his residence in 2017.

Brought to the Ganga ghat from Rae Bareli jail to attend the last rites of his wife, who died in a road accident, the victim's uncle was not allowed by the district administration to interact with reporters.

But as he was being taken back to the police vehicle after the cremation, he burst out: "My entire family has been eliminated. I have been framed in fake cases."

"Kuldeep Singh Sengar has got everything done. I have all the evidence," he said.

His wife was among the two people who died when the car they were travelling in with the rape victim and her lawyer was hit by a truck.

The other person dead was the rape victim's another aunt.

On Tuesday, the Centre handed over the probe to the CBI on the recommendation of the Uttar Pradesh government.

The state government has come under severe criticism for failing to provide security to the 19-year-old woman who was allegedly raped by the BJP MLA in 2017.

The Uttar Pradesh Police had on Monday filed a murder case against Sengar and nine others after the rape survivor's family filed a complaint, alleging "conspiracy" behind the car crash. 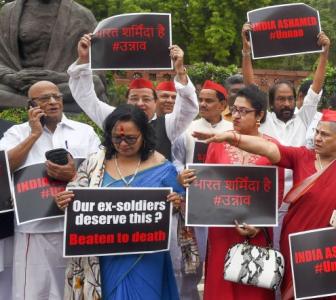 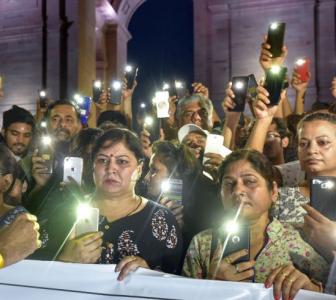