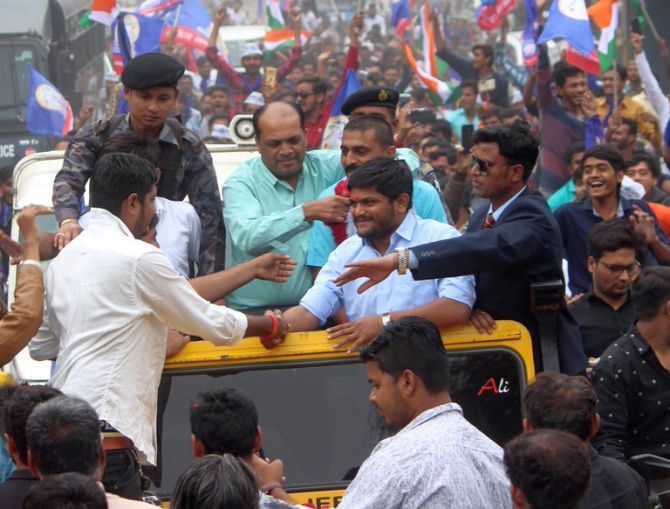 The caste factor is likely to remain at the core of Gujarat assembly polls following the emergence of caste-based movements, with major parties distributing tickets accordingly.

Both the Bharatiya Janata Party and the Congress have kept the caste arithmetic in mind while given tickets for polls. The Patidars and Other Backward Classes have been given maximum tickets by both the main parties.

The BJP has nominated 50 Patidars this time, while the Congress has fielded 41 candidates from the community.

The ruling party has fielded 58 OBCs while the Congress has 62 such nominees.

The main opposition party has given tickets to 14 Dalits while the BJP has fielded 13.

As per political pundits, this assembly poll will be a battle to win that "extra four to five per cent vote share".

The BJP cannot afford to lose that while the Congress is trying its best to attract the castes which are 'angry' and can fill in that gap in the vote share.

According to political analyst Achyut Yagnik, a mere swing of about four to five per cent would prove to be game changer for the Congress.

However, he believes that though there is some possibility the Congress may win some additional seats this time, it is too early to predict that it would come to power despite the support extended by caste leaders -- Hardik Patel, Alpesh Thakor and Jignesh Mevani.

"If you look at the vote share in the elections of 2002, 2007 and 2012, the Congress bagged around 40 per cent while the BJP got 49 per cent each time. Now, even a slight swing four to five per cent would significantly benefit the Congress," Yagnik said.

He said "the caste factor is still at the core of Gujarat's politics and tickets are also distributed accordingly."

Since the last two decades, the BJP was enjoying support of the Patidars, be it urban or rural voters. But caste equations seem to have changed after Hardik Patel's agitation demanding reservation for Patidars, which triggered the rise of a counter agitation by OBC leader Alpesh Thakor.

When the BJP government was busy placating them, Jignesh Mevani took up the cause of Dalits after the Una flogging incident and started agitating against the ruling party.

While Thakor has already joined the Congress, Patel and Mevani moved closer to the opposition party and appealed to their respective communities not to vote for the BJP.

As per a rough estimate, the Patidars account for 11 to 12 per cent of Gujarat's six crore population. Though scattered across many sub-communities, the OBC population, including the influential Thakors in north and Kolis in central Gujarat and Saurashtra, account for around 40 per cent.

The BJP is fighting on all the 182 assembly seats while the Congress has not fielded its candidates on six seats -- five which were given to the Bharatiya Tribal Party and one seat where Mevani is contesting as an independent.

Political analyst Ghanshyam Shah feels the Congress has an upper hand at the moment.

However, he says, it will be premature to think that the entire Patidar community or the OBCs would vote for the opposition party.

"Ultimately, Hardik and Alpesh are leading an individual fight in some way. Though they have extended their support to the Congress, we should not conclude that all the votes of Patidars and OBCs would go the party," Shah said.

"However, looking at the current dynamics, the Congress is having an upper hand in comparison to the 2012 assembly polls," he said.

Though the Congress has indirectly supported Mevani by not fielding any candidate against him on Vadgam (SC) seat, Shah claimed that the Dalit vote swing would not leave any impact due to the marginal population.

"Dalits are scattered. They are only seven per cent of Gujarat's population. Even in reserved seats, they account for only 10 to 11 per cent," he said.

Another political analyst Hari Desai feels it will be a challenge for the BJP to retain its loyal vote bank of Patidars. However, he admits that Patels are not opening their cards despite being persuaded by Hardik Patel.

"We can not conclude that all the Patidars would vote as per Hardik's appeal, because, those who are party workers and loyal, will ultimately go for the BJP. But, it is clear that their loyal vote bank is drifting away after Hardik's agitation," he said.

Citing the vote share data, Desai claimed that a minor swing in the loyal vote bank of the BJP would prove to be a windfall gain for the Congress.

This time, the Congress has fielded six Muslims while the BJP has not nominated anyone from the community.

According to the Election Commission of India's data on the 2012 Gujarat polls, the BJP then received 47.85 per cent of the valid votes, while the Congress garnered 38.93 per cent votes -- a difference of 8.92 per cent between the two parties.

While the Congress is elated to see the new caste dynamics coming to its rescue, the BJP still believes that no one is leaving its ship.

"People from all communities, including Scheduled Castes and Scheduled Tribes are coming to Congress with a hope that we will bring a solution to their problems. We firmly believe that Congress will form the government this time," Congress spokesperson Manish Doshi said.

However, the BJP feels this is not going to happen.

"It is a fact that when a social movement turns political, it loses its credibility. The same is happening with Hardik, Alpesh and Mevani. Gujarat never accepts people who talk negative," he said.

Gujarat will vote in two phases -- on December 9 and 14 -- to elect a new 182-member assembly. The counting of votes will take place on December 18. 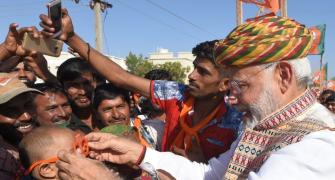