News
Business
Movies
Sports
Cricket
Get Ahead
Money Tips
Shopping
Sign in  |  Create a Rediffmail account
Rediff.com  » News » SC asks states why they not be made liable to compensate people for bad air quality

The Supreme Court on Monday asked all the states to explain within six weeks as to why they should not be made liable to pay compensation to persons affected by bad air quality saying it is their bounden duty to provide basic civic amenities, clean air and drinking water to citizens. 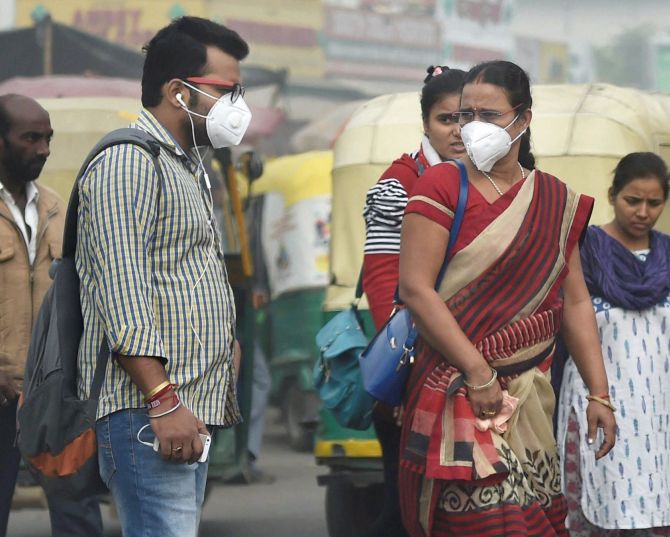 It took serious note of water pollution and asked the Central Pollution Control Board and other concerned states and their pollution control boards to place before it data on tackling the issue of pollution, sewage and garbage disposal in rivers, including Ganga and Yamuna.

A bench of justices Arun Mishra and Deepak Gupta asked the Centre and the Delhi government to sit together and take decision within 10 days with regard to installation of smog towers in Delhi-National Capital Region which would help in combating air pollution.

The bench said that "right to life of human is being endangered" by the bad air quality and water pollution and the states have to deal with the situation as "life span is being shortened" due to this.

"Time has come to require the state governments to explain why they should not be asked to compensate persons who are affected by bad air quality," the bench said and asked the states, "Why liability should not be saddled for the tortious act of
government machinery for their failure in discharging their duties".

The apex court also took exception that states and Centre were indulging in "blame game" over crucial issue of air and water pollution and asked them to work in tandem for welfare of the people.

It said despite various orders being passed by the top court from time to time in the pollution matter, the situation has worsened over the years and authorities have to be blamed as they have not performed their duties.

Referring to various Articles of the Constitution, the bench said it is the duty of state to take care of citizens and their health but the authorities have failed to provide good air quality and pure drinking water to them.

It termed as "alarming" the situation of stubble burning in Punjab, Haryana and Uttar Pradesh and said despite its order
prohibiting it, burning of crop residues in these states have increased.

The bench said "not only the state machinery is responsible but farmers are also responsible for this".

The bench pulled up the chief secretaries of Punjab, Haryana and Uttar Pradesh for their failure to prevent instance of stubble burning despite the apex court's order.

"Can you treat people like this and permit them to die due to pollution," asked the bench and said life span of millions of citizens has shortened and people are "suffocating" due to pollution in Delhi-NCR.

During the hearing, the bench told Solicitor General Tushar Mehta, "Should this be tolerated? Is this not worst than internal war? Why people are in this gas chamber? If it is so then you better finish them with explosives. If it goes on like this then it would be better to go rather than suffer from diseases like cancer".

"You open the door of your house and see the situation (of pollution). No state want to take any measure which is anti-popular," an anguished bench said.

The top court took suo mote (on its own) cognisance of the controversy regarding supply of alleged unsafe drinking water in the national capital and said it is the duty of the state to provide drinkable water to the citizens.

Chief secretary of Delhi, who was also present in the court, raised the issue regarding governance in the national capital and division of power between the Centre and Delhi government.

"The problem of governance, if any, cannot come in the way in dealing with such matters," the bench said and asked the concerned authorities to sit and work out together to find out how to improve air quality and how to provide safe drinking water to the people.

The bench also criticised the Centre and Delhi government for "politicising" the issue of water pollution and said they cannot indulge in this any "blame game" as people would suffer in this situation.

The bench said that six cities in country, out of which three are in Uttar Pradesh, are more polluted than Delhi and issues like air quality, safe drinking water and garbage disposal was virtually affecting every part of the country.

"It appears to be a case of lost priority," the bench said, adding, "In India, this can be done but there is lack of proper planning".

The bench asked the Delhi government to apprise it about the steps taken with regard to anti-smog gun which sprays atomised water 50 metres in the air to bring down pollutants.

It said CPCB should be associated on the issue of anti-smog guns.

The court directed the Centre to constituted a high-level committee within three days to consider and work out modalities regarding other technologies, which would help in combating pollution, and said that a report be filed before it within three weeks on this issue.

The bench highlighted the problem of "dreaded diseases" like cancer which a large section of people are suffering from due to bad air and water quality.

Only policy making to deal with pollution is not required, the real issue needed was implementation at the ground level, it said. 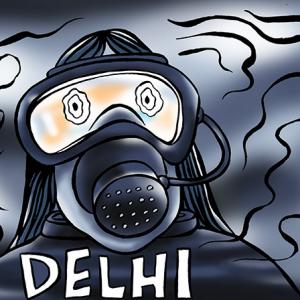