Do not burn agarbattis for any ritual.

That's the directive the Centre-run System of Air Quality Forecasting And Research or SAFAR has issued to Delhiites as the national capital's air quality turned 'severe' on Tuesday for the first time this season.

Eighteen areas in the Union territory recorded 'severe' air quality with the highest AQI at 4 pm on Tuesday recorded at Anand Vihar at 467, according to a data by the Central Pollution Control Board.

The problem is so severe that multiple agencies have issued several precautionary measures. 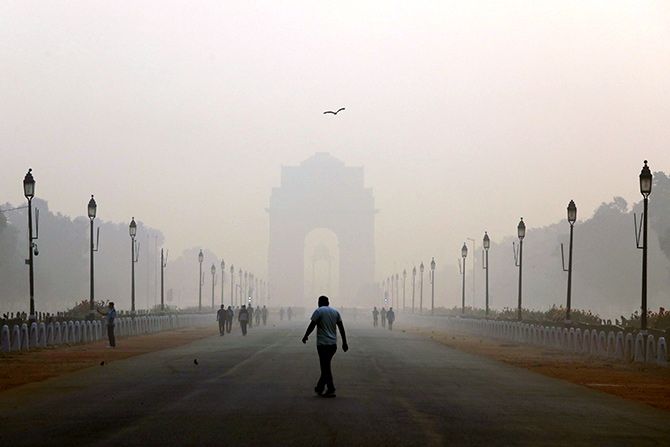 As stubble burning intensified in neighbouring states, Delhi authorities have banned construction activities along with halting operations of industries using coal and biomass as fuel between November 1 and 10. Photograph: Anushree Fadnavis /Reuters 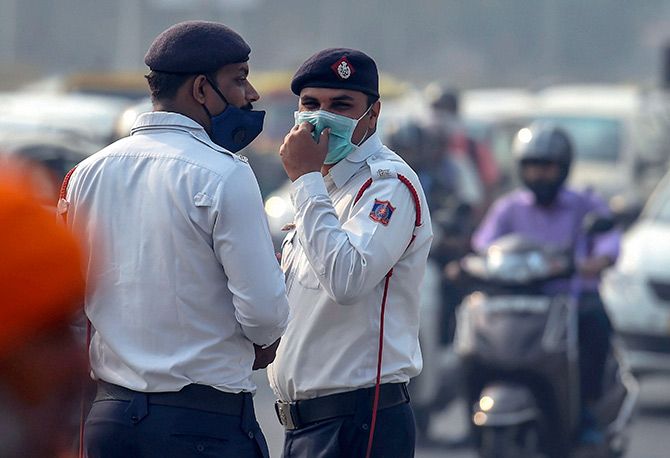 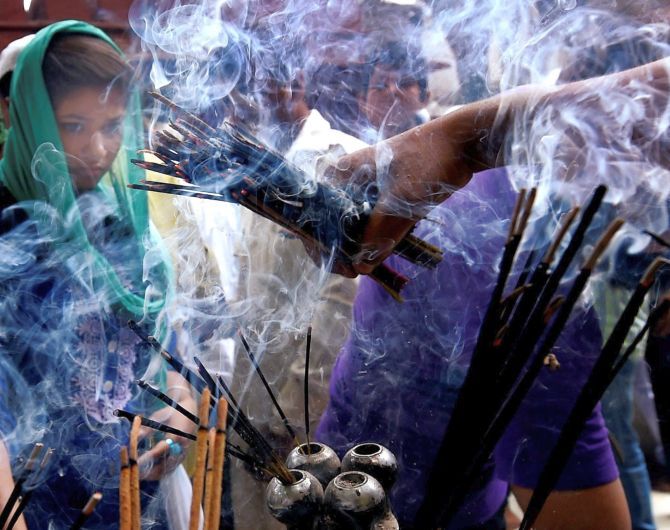 SAFAR has issued a health advisory for public, asking Delhiites to not to rely on dust masks for protection. The agency has advised Delhiites to avoid all outdoor activities and give a miss to morning walks. "If the room has windows, close them, if the air conditioner provides a fresh air intake option then choose it, avoid burning anything such as wood, candle or even an incense," it said. The advisory also recommended frequent wet mopping and using masks known as N-95 or P-100 respirators only for outdoor activities. Photograph: Shahbaz Khan/PTI Photo 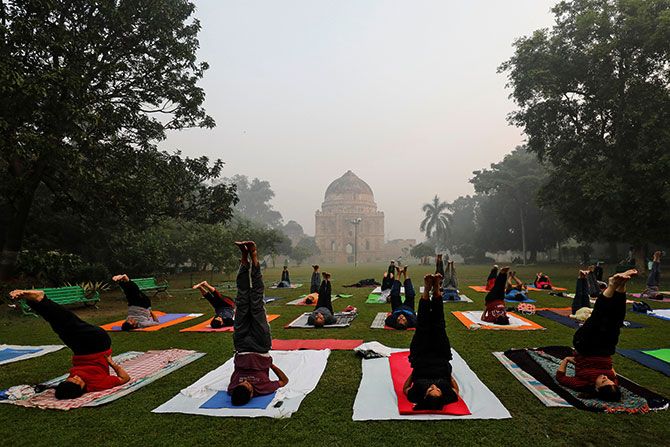 A SAFAR official said pollution is likely to increase faster now with lead pollutant as PM10 because of new development as shown by SAFAR-model where it is indicating that western disturbances may hit over western Himalayan region from October 31. "Lot of moisture is already getting introduced in Delhi sky as an early signature. The withdrawal will bring even more moisture in the air and result in fall in temperature. Upper winds already turned north-westerly (stubble site) on Tuesday. Only favourable thing is that upper wind speed is moderate and fire counts are low," the official said. Photograph: Anushree Fadnavis /Reuters 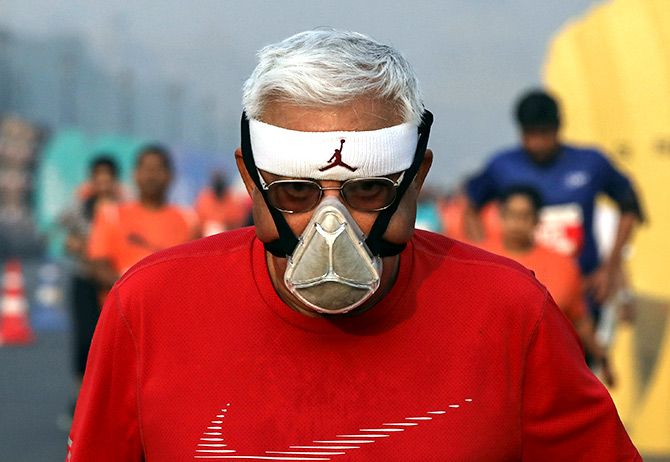 To avoid November pollution during Diwali, when the firecrackers are set off, Delhi's half marathon was held early in October. The organisers used ultra high frequency radio waves to clear the air for the runners, an experimental technique to improve the city's notorious air quality. Photograph: Anushree Fadnavis /Reuters 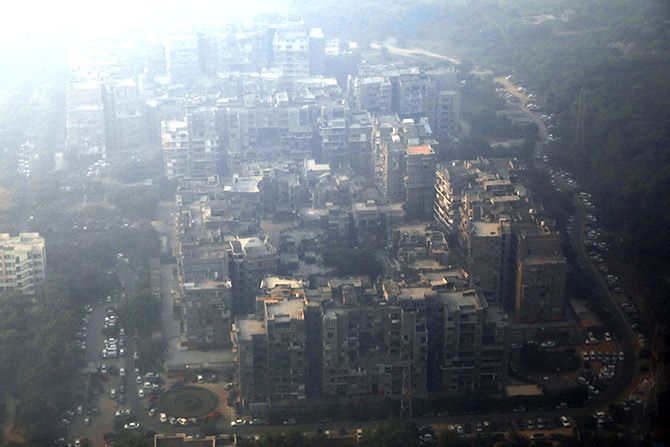 About 44 joint teams from various agencies will be deployed from Thursday, November 1 to check air pollution in the national capital, the Aam Aadmi Party-led Delhi government said. The teams have been mandated to take strict punitive action against violators responsible for sources of air pollution, it said in a statement. Photograph: Danish Siddiqui/Reuters On the issue of firecrackers, the environment ministry said that the directions of the Supreme Court shall be followed strictly in Delhi and NCR. "Timings and locations as envisaged in the Supreme Court's order for bursting of firecrackers would be strictly adhered to. Further only eco-friendly fire crackers would be sold after proper authorisation has been obtained from Petroleum and Safety Organization," the ministry said in a statement. Photograph: Anushree Fadnavis /Reuters 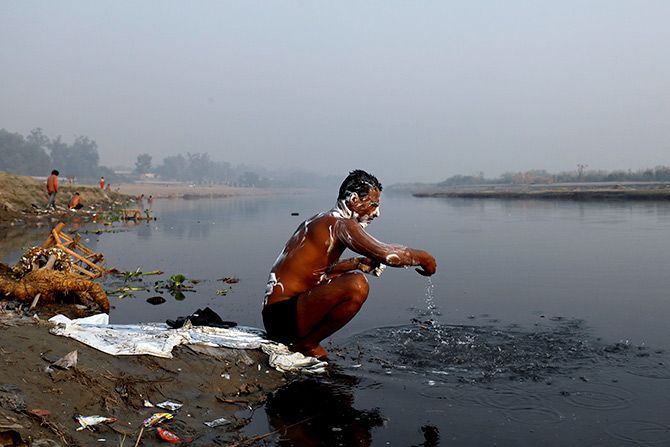 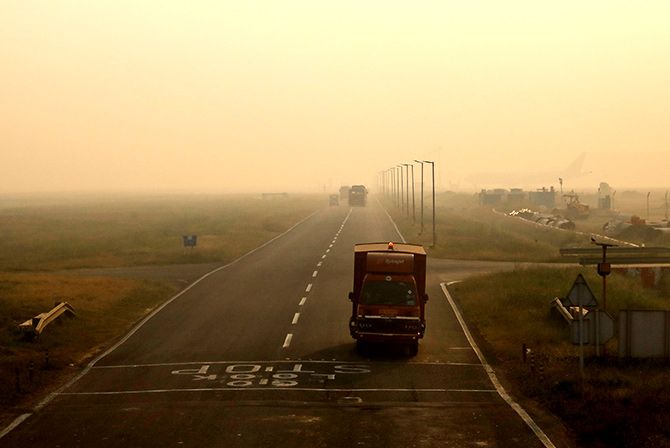 D Saha, former additional director and head of air quality management division in CPCB, said entire northern India coupled with the Indo-Gangetic plains are under the grip of 'severe' to 'very poor' air quality. "There are depression in eastern India, which does not allow free flow of air from north or north west resulting in calm condition both in the upper and lower atmosphere," he said. Photograph: Danish Siddiqui/Reuters 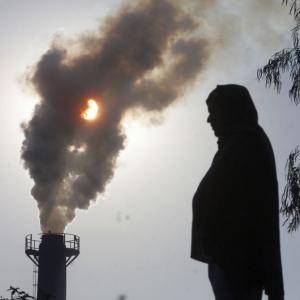