The coming elections seem a tough battleground for the BJP in the wake of anti-incumbency, Patidar and Dalit agitations and implementation of the GST. 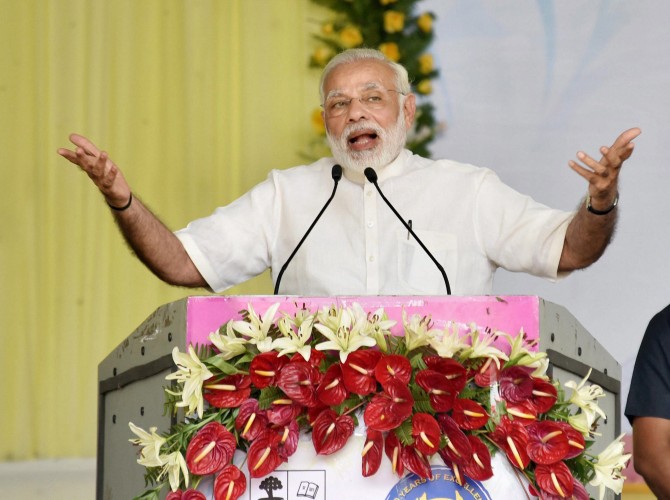 It is said Gujarat made economic strides under the stewardship of Narendra Modi between 2001 and 2014.

Data, however, suggests that Modi’s absence after his elevation as the Indian prime minister in May 2014 has not made much difference to economic growth in the state.

The other indicators such as state fiscal deficit (below 2% of GSDP), public debt as percentage of GSDP (around 18%) and the state’s spending on the social sector (42% of revenue expenditure) and agriculture (around 5%) remained mostly unchanged under Modi’s successors, Anandiben Patel (2014-16) and Vijay Rupani.

Growth in non-tax revenue has also declined in 2015-16 and 2016-17. The goods and services tax (GST) and demonetisation are further expected to impact the government’s revenue this year.

Though there is resentment among traders in Gujarat, unhappy with Modi’s demonetisation move and implementation of the GST, some also miss his charisma and decision-taking ability.

“Modi was a micro-manager. Right from the first Vibrant Summit to the last one he hosted, Modi wanted to be informed about minute details, including things such as seating and food arrangements. He did things with such an ease that it would leave us in awe,” said someone who closely works with the Gujarat government.

Achyut Yagnik, a leading expert on Gujarat, says there has not been much difference to Gujarat’s economic growth since Modi became PM.

“Modi’s Gujarat model was focused around top-level industrialists and they continue to gain from his policies,” he feels. “The only difference has been administrative control. Modi had tight control over the bureaucracy, not the case with Anandiben Patel and Vijay Rupani.”

A senior bureaucrat said Patel failed to emulate the Modi style of governance despite having worked with him for years. She was strict with them as revenue minister and tougher after becoming CM.

“She wouldn’t show respect when she spoke in meetings. She would usually make her point and then insist on getting things done her way. She was not open to counter-ideas from IAS officers for the most part,” the officer said, on condition of anonymity.

Adding: “Modi, despite being a tough taskmaster, used to respect people. He held meetings in a dignified way.”

Which, he said, explained why bureaucrats became tight-lipped during Patel’s two-year term. Since they became guarded, it also stopped the incessant flow of positive news from government quarters as was the case during Modi’s term.

“Patel couldn’t carry forward the ‘Modi brand of marketing’ in the truest sense.” In Modi’s time, announcement of big industrial projects was routine and such news was believed to have created a positive atmosphere for the state government.

The Bharatiya Janata Party leadership, mainly Modi and party president Amit Shah, made Patel quit in the aftermath of the Patidar agitation. She failed to dissuade the land-owning community (mostly Patels, her own community) from holding protests for reservation in jobs and higher education institutes. Unconfirmed reports about Patel’s proximity to the real estate lobby also contributed to her exit in 2016.

Patel’s successor, Rupani, picked by the Modi-Shah duo, has already begun announcing big-ticket projects as the state prepares for the assembly poll in December. For the past year, his government has been regularly advertising its achievements and new projects on Gujarati television channels, movie halls and the print media.

It is believed that a company which recently signed a memorandum of understanding with the state government, was asked to wait and time the announcement with the election dates.

Rupani, unlike Patel, is considered to be more amenable to bureaucrats. But, can he make a difference in the coming election, is still being debated.

The other question which troubles the BJP is beating anti-incumbency. Modi was successful as he used to replace most legislators before the elections and people voted in his name.

Since Modi has moved and Rupani is yet to prove his mettle, the coming elections seem a tough battleground for the BJP in the wake of anti-incumbency, Patidar and Dalit agitations and implementation of the GST.