Munda to take oath as Jharkand CM on Saturday 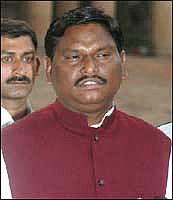 Arjun Munda will be sworn in as Jharkand's new chief minister on Saturday at the head of a Bharatiya Janata Party-Jharkhand Mukti Morcha coalition with the Governor inviting him to form a government on Thursday shortly after the Union Cabinet recommended revocation of President's rule in the state.

42-year-old BJP leader Munda, who is getting the chief ministership post for the third time, will be the eighth CM in 10 years since the mineral rich state was carved out of Bihar on November 15, 2000.

No chief minister has ever completed a full term in the state. Governor M O H Farooq invited the BJP's chief ministerial candidate to take oath on September 11 at 11am, Raj Bhavan sources said in Ranchi, two days after Munda staked claim.

The BJP and Shibu Soren's JMM came back together over three months after they parted ways leading to imposition of President's rule. Munda was asked to prove his majority on the floor of the assembly within seven days from the date of taking oath the sources said.

The present assembly, which was kept under suspended animation after imposition of Central rule over three months back, is the third and was constituted on December 30 last.

The invitation by the Governor came after Munda called on him shortly after the Cabinet recommended revocation of Presidents rule. "The Cabinet has made appropriate recommendation to the President based on Governor's recommendation. You will have to wait for the President's decision," Home Minister P Chidambaram told reporters in New Delhi after a meeting of the Union Cabinet which took up the issue.

Munda has claimed the support of 45 MLAs in the assembly with an effective strength of 81. In the list submitted by Munda to the Governor on Tuesday to back up claim he had majority support, there are 18 MLAs each of BJP and JMM, two from Janata Dal United, five from All Jharkhand Students Union and two Independent MLAs -- Chamra Linda and Bidesh Singh.

Farooq had sent his report to the Centre on September 7 after Munda, the newly-elected BJP legislative party leader, staked claim to form the government, submitting a list of 45 MLAs in the 81-member house and parading 44 of them at the Raj Bhavan.

President's Rule was imposed in Jharkhand on June 1 with the assembly being put under suspended animation after BJP withdrew support to the Shibu Soren-led government after the latter voted with the UPA during cut motions in Parliament and no party came forward to form an alternative government.

Congress, which has 14 MLAs and its ally JVMP 11, has not shown interest in forming government in the state owing to 'trust deficit' with JMM. Senior Congress leaders, on condition of anonymity, said the party realises that its mandate is to sit in the opposition there and it will continue to do so instead of 'muddying' the political waters there.

Babulal Marandi was the first chief minister before Munda took over from him. In between Madhu Koda held the post once and Soren thrice.