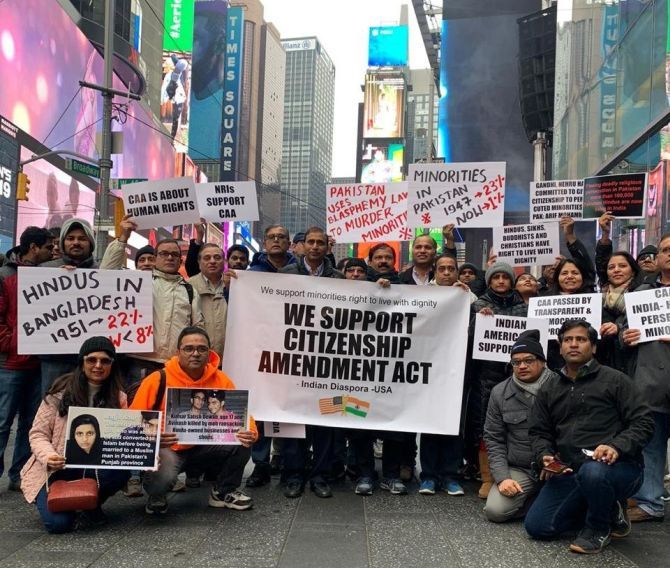 Hours after the Kerala Assembly passed a resolution demanding scrapping of the Citizenship Amendment Act, Union Law Minister Ravi Shankar Prasad asserted that the law was binding on the entire country and was 'perfectly legal' and 'constitutional'.

He said only Parliament has exclusive powers to pass any law with regard to subjects under the seventh schedule and not any assembly.

"It is only Parliament which has got the powers to pass any law with regard to citizenship; not any assembly, including the Kerala Assembly," he told reporters in Thiruvananthapuram.

On the assembly resolution, Prasad hit out at the state government, saying that Chief Minister Pinarayi Vijayan should seek better legal advise.

"This law is binding on the entire country. CAA is not related to any Indian Muslim, much less to any Indian citizen. It only relates to six persecuted communities of three countries--Pakistan, Bangladesh and Afghanistan and who are being singled out due to their faith".

Due to their religious faith, there has been a long history of persecution, the minister said.

Recalling that late prime ministers Indira Gandhi and Rajiv Gandhi had provided citizenship to minorities from Uganda and Sri Lankan Tamils, respectively, he wondered why was it OK if Congress did so and 'it is a problem' when Prime Minister Narendra Modi or Home Minister Amit Shah did the same.

"When the Congress does, it is okay. When Indira Gandhi and Rajiv Gandhi did it, it was Ok. But when Prime Minister Narendra Modi and Home Minister Amit Shah does it, it is a problem", he said, adding this was the 'double standards of the worst order'.

"This is double standards and hypocrisy of the worst order," he said strongly defending the CAA which has triggered protests across the country in the past weeks.

The CAA 'does not relate to any Indian citizen or create or take away citizenship from any Indian. It is only applicable to persecuted minorities (from the three countries),' he said.

CAA was perfectly Constitutional and legal, he said and charged the opposition with unleashing a 'deliberate misinformation campaign'.

The Congress, the minister said, had administered many of these laws, yet it has become part of the disinformation campaign.

On the National Population Register (NPR), which has also come in for opposition from several quarters, including Kerala government, Prasad said it is a census governed by the Census Act and is a register of usual Indian citizens.

The population data becomes the basis for policy making for central and state governments, he added.

Referring to the National Register of Citizens (NRC), he said Prime Minister Narendra Modi had clearly stated that nothing had been decided on NRC, while in Assam it was done as mandated by the Supreme Court order.

This whole 'disinformation campaign' was also leading to 'unprovoked and unbridled' violence, the minister said.

"We respect democracy and respect the right to dissent. Everyone has the right to criticise the prime minister or home minister. But if the tukde tukde gang wants to break India, we cannot allow," he said.

Condemning the 'misbehaviour' towards Kerala Governor Arif Mohammed Khan, against whom protests were raised in the Indian History Congress at Kannur recently, he said the so called eminent people were seen pushing him (Governor) on the stage.

This behaviour cannot be justified, he said. Asked if the government was prepared to call for an all party meeting on CAA, he said there was a debate for an entire in both houses of Parliament on it.

"What more clarification has to be given?" he asked.