Burglaries in Hindu homes on the rise in Fairfax

By George Joseph
September 05, 2009 00:11 IST
The Indian-American community in upscale Fairfax County, Virginia, has begun feeling insecure following a rash of burglaries that appear to target their households. Of 21 burglaries reported in the county since January, 16 were in Indian homes.

Adding an unusual element to the crimes, police have noted that most victims had displayed elements of the Hindu iconography outside their homes and garages, with idols or paintings of Ganesh being the most ubiquitous.

The police believe the robbers are seeing in such signs the possibility that there will be gold on the premises -- a thought that fits into the Indian love for gold jewelry and the penchant of Indian Americans to see gold as an investment.

In addition the burglars, who strike during the daytime hours when the occupants are away at work, have taken away electronic items, passports and other personal documents.

In a statement, Fairfax County police suggest the burglaries are the work of one individual or gang, that is systematically targeting the homes of Hindus.

Most burglaries have happened in the western part of the county.

A few of the victims have told the police of seeing a white or silver Jeep Cherokee, containing a Hispanic female with red hair and two Hispanic males in their 20s. The woman typically will knock at the front door to ascertain whether anyone is inside, while the men enter through the back.

The last robbery was reported July 28. "The police have intensified its efforts to prevent further burglaries. The patrolling is strengthened and we have asked the people to be watchful," Officer Tawny Wright, a spokesperson of the Fairfax County Police Department, told India Abroad.

Wright said the robbers target the homes of Indians and Middle Easterners. "They think these homes have gold and other valuables. Passports can be sold for money and there is a market for it," she noted, while advising the community to eschew displays of religious items outside their doors, to keep an eye on strangers, and to keep their doors locked at all times. "Though people feel less comfortable, they are not panicky," she said.

Over 100 people, mostly from the McNair Farms community of Herndon, met the police on July 30 to voice their concern. Rajesh Varkhedkar, who was part of the delegation, told the police that he had arrived unexpectedly at his house around noon June 4, to find someone breaking into his basement door. They fled on seeing him, Varkhedkar said.

"I saw one individual run and get into a silver Toyota Rav4 with two others waiting, and they all sped off," he told mediapersons.

Lieutenant Mike Shamblin, who is in charge of the investigation, told the delegation that the burglars tended to pry open a door or window in the back of the house and to head straight for the master bedroom.

Referring to the descriptions of a red haired female and two Hispanic males, Shamblin said the two males seemed to be in the guise of maintenance workers, so that anyone who saw them in a neighbor's backyard would think they were working.

Thus far, the burglars have tended to avoid homes fitted with security systems, though in a couple of instances they have cut the phone line to prevent the alarm from sounding.

Varkhedkar said he will not remove the Ganesh symbol that is outside his front door. "I have no reason to do so. More importantly, I have nothing to steal. Stereotypes are often false," he was quoted in the Fairfax Times. 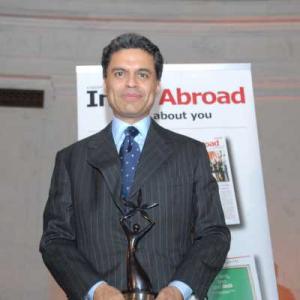 Fareed Zakaria is India Abroad Person of the Year

Bobby Jindal is India Abroad Person of the Year