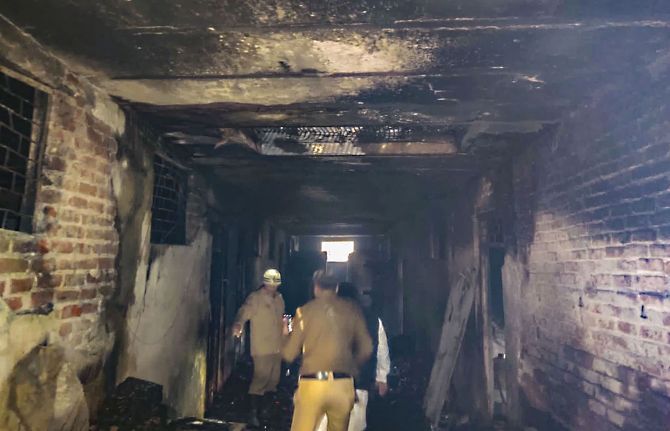 IMAGE: Police and rescue personnel inspect inside the factory at Rani Jhansi Road where a major fire broke out, in New Delhi, on Sunday. Photograph: Twitter/PTI Photo

The four-storey building in Anaj Mandi where a massive blaze killed 43 people on Sunday morning was packed with combustible material and had just one door that opened into a narrow lane, virtually making it a 'fire trap', officials said.

Over 30 fire tenders and several ambulances cramped into congested areas around the building, which housed illegal factories, while nearly 150 firefighters worked to pull out 63 people and douse the blaze that was reported at 5:22 am.

The building, which is an area of 600 sq yards, had just one door and so, fire department personnel cut window grills and metal meshes to enter, the Delhi Fire Services officials said, adding that one fire tender was sent at a time through the narrow lanes.

They said a preliminary probe suggested that a short-circuit triggered the fire, which started in the building's second floor.

The authorities are to be blamed for this situation, he said

Each section of the building had a manufacturing unit. Some made school bags and some toys. There was also a small printing press in it, Anaj Mandi resident Arjun Kapoor said.

"It was only a matter of time. Even on Saturday a fire was reported from another building," said Hussain, a local.

The Saturday fire was reported from a water gun manufacturing unit at 12:32 pm and was doused by 2 pm, a DFS official said.

Kapoor also said that 'around 4 am on Sunday, a truck with materials arrived here, and after unloading and shifting of materials into the building, labourers went to sleep'.

The Delhi government has ordered a magisterial probe into the tragedy, the worst fire accident in the national capital since the 1997 Uphaar Cinema blaze that claimed 59 lives. It has sought a report within seven days.

Most labourers were migrants and 20 of them were supposed to leave for Bihar on Sunday morning, Mohammad Ismail said.

Rakesh Kumar Yadav said there are over 40,000 shops and over 1000 factories running in the area.

It is a business hub since the Mughal era, he said.

Hundreds of people gathered at the spot after they got to know about the fire. 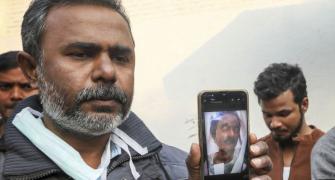 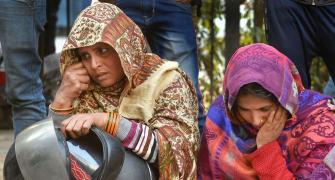 'I'm going to die, look after my family' 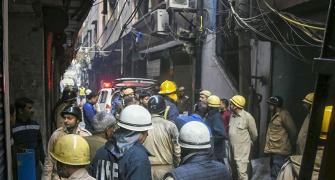 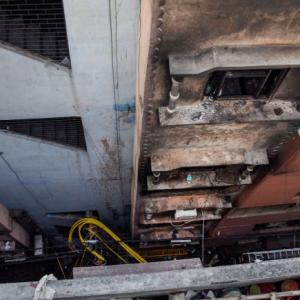 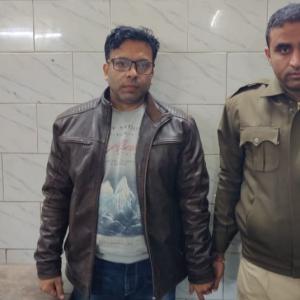