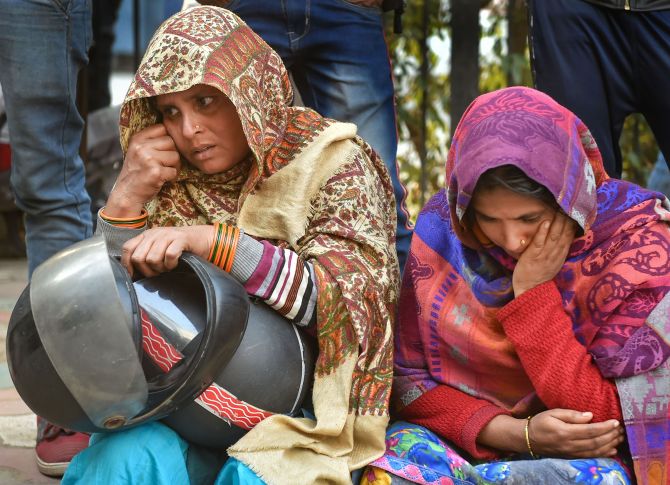 IMAGE: Family members of victims of a fire at a factory in Rani Jhansi Road wait outside the mortuary of Lok Nayak Hospital, in New Delhi, on Sunday. Photograph: Kamal Kishore/PTI Photo

Musaraf Ali, one of the 43 people who died in Anaj Mandi inferno on Sunday, made the last phone call to his friend -- Monu, asking him to look after his family and kids.

Minutes before his death, 30-year-old Musaraf Ali called up his friend and told him that he was going to die due to fire as 'no fire tenders have come yet'.

"Come to Karol Bagh. There is a fire. I am going to die. There is no way to escape. Look after my family. I am not able to breathe. I don't know how the fire broke out. There is no way. Monu, look after my family and my kids. Don't tell anyone (about Musaraf Ali) instantly. Fire is in the whole building. No fire tenders have come yet," Ali can be heard in conversation with his friend on the phone.

Ali's friend Monu kept asking him to look for a way to come out of the building.

Monu continuously asked Ali about fire tenders and kept telling him not to worry.

In his last words, Ali told Monu: "I will die within a few minutes. Even if I die, I will be with you."

Delhi Police have arrested the owner of the building in which the fire broke out earlier on Sunday, which claimed the lives of 43 people.

"Rehan and his manager Furkan have been arrested. The police are also interrogating brothers of Rehan -- Shan and Imran. We are also looking for those who were running the factory.

"We are investigating the matter. From the information we have, more or less there is no possibility of more bodies being recovered," DCP, North, Monika Bhardwaj told reporters.

According to police, there was some part of the building, which Rehan had not given on rent.

A case has been registered under Section 304 (punishment for culpable homicide not amounting to murder) of the Indian Penal Code against building owner Rehan, who had absconded after the fire broke out.

As many as 43 people died after the fire broke out in the factory at Anaj Mandi here in the wee hours on Sunday. 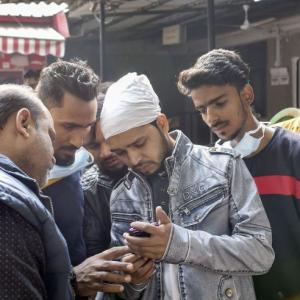