Marked by some historic events, Budget Session of Parliament comes to a close 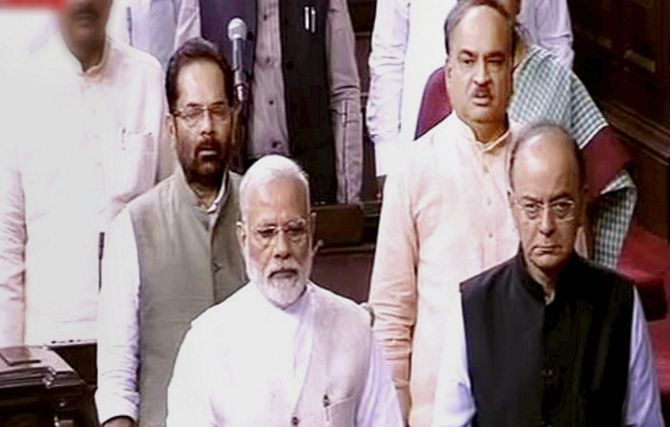 Marked by some historic events, the budget session of Parliament came to an end on Wednesday after approval of four landmark goods and service tax bills and several other legislations besides the budget and the demand for grants of various ministries.

The two-part session, which was advanced for the first time in the country's history, commenced on January 31 with the customary Address by the President to a joint sitting.

For the first time, the budget was presented on February 1, almost a month ahead of the usual date, as the government wanted to complete the budgetary exercise before the end of March instead of May, the time by which the process would be completed earlier.

Another historic development witnessed this time was the merger of the railway budget with the general budget, ending a 92-year-old practice of presentation of two separate budgets.

The session also saw all the parties coming together in both the Houses over the death sentence awarded to Indian national Kulbhushan Jadhav by a Pakistani military court on the charges of spying.

The first part of the session was from January 31 to February 9 and the second part from March 9 till April 12.

Both houses were adjourned sine die on Wednesday.

Altogether, there were 29 sittings, with the Lok Sabha working for 176 hours and 39 minutes.

The House lost eight hours and 12 minutes due to disruptions, including one by the Shiv Sena over the flying ban by domestic airlines on one of its MPs who had allegedly thrashed an Air India employee.

"During the session, of the 560 starred questions, more than 136 were given oral answers, which comes to around 4.68 questions per day. 494 issues were raised under Rule 377 and 158 Private members Bills were introduced in the House,” Speaker Sumitra Mahajan said in her valedictory remarks.

Different ministers gave 51 statements during the course of the session and laid 1,864 papers on the table of the House.

Mahajan said the Budget Session also saw tabling of a combined Union and railway budgets on February 1, almost a month before than the usual scheduled date, which was a ‘historic’ step.

During the joint sitting of Parliament which was addressed by President Pranab Mukherjee on January 31, Lok Sabha member and Indian Union Muslim League leader E Ahamed collapsed and was rushed to hospital.

Later, he passed away due to massive cardiac arrest.

The Upper House of the Parliament worked for over 136 hours. However, it lost 13 hours due to furore over different issues.

"During the session, the Rajya Sabha passed or returned 14 government Bills which generated lively debates. The Union Budget 2017-18 and the working of the Ministry of Railways and GST Bills were discussed at length," Chairman Hamid Ansari said in his valedictory remarks.

The House unanimously passed the historic GST bills, the biggest tax reform measure which will bring India under a uniform indirect tax regime.

Besides, the House also passed or returned 14 government bills, including the Enemy Property (Amendment and Validation) Bill and the Constitution (SCs) Order (Amendment) Bill.

He said the performance of the members on the last two rows was ‘remarkable’ as they made 86 Zero Hour submissions which is near 42 percent of the total.

The back benchers also asked 260 supplementaries, around 48 percent of the over 535 such questions.

During the session 33 private members’ bills were introduced while there was animated debate on short duration discussions on issues like election reforms and Aadhaar, he said.

"While a new Member elected in a bye-election from the state of West Bengal joined the House, we lost one esteemed sitting member Haji Abdul Salam, who passed away on February 28,” the Vice President said.

Ansari thanked all leaders and members for their cooperation as the House adjourned after national song Vande Mataram was played.