A former IAF wing commander, who is being probed for allegedly impersonating his superior officer in a bid to pilot for Union home minister Amit Shah, has resigned from the air wing of the Border Security Force, officials said on Sunday. The resignation of Wing Commander (Retd) J S Sangwan, however, has not yet been accepted.

His application is under process, a senior BSF official said.

The Kargil War hero is under investigation by the BSF and the Delhi Police for impersonating and misrepresenting a superior officer in a bid to fly Shah's aircraft, the official said.

It is not immediately known whether Sangwan's resignation will be accepted as acceptance means allowing him to leave without facing any inquiry.

Under the norms, petitions for resignation or retirement are not accepted if the person is facing an inquiry.

On September 2, Sangwan petitioned the BSF for "voluntary resignation" from service.

He sent a second letter on September 16 asking the BSF brass to relieve him by October 31.

Both the applications are under process, another official said.

However, the 'Staff Court of Inquiry' against Sangwan is in progress and the BSF air wing, where the pilot is employed, has provided necessary details to the Delhi Police's Domestic Airport Palam police station which is investigating the case related to impersonation.

The BSF air wing normally flies the Union home minister in its Embraer aircraft in his outstation tours.

According to BSF officials, the preliminary inquiry found that Sangwan was, perhaps, trying to clock in enough flying hours on an Embraer so that he could quickly begin to fly the home minister.

For flying a VIP aircraft, a pilot needs a minimum of 500 hours of flying under his belt. To fly the home minister, the requirement is in excess of 1,000 hours. 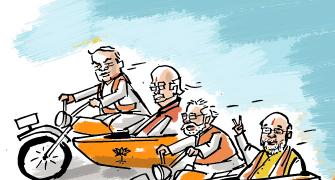