News
Business
Movies
Sports
Cricket
Get Ahead
Money Tips
Shopping
Sign in  |  Create a Rediffmail account
Rediff.com  » News » 'We are lucky to have Narendra Modi and Amit Shah'

'After Vajpayee-Advani, Modi-Shah is the second best in India.' 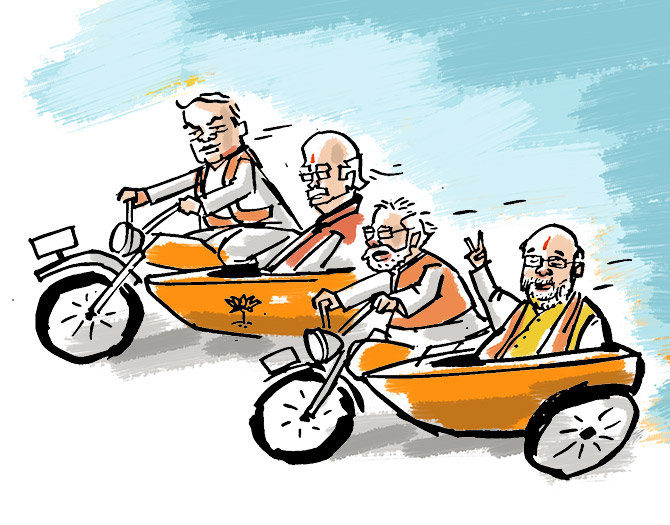 Ram Naik finished his term as Uttar Pradesh governor earlier this year and has now returned to his native Mumbai.

The 85-year-old sprightly Bharatiya Janata Party veteran began his political career in the Jan Sangh, the BJP's parent, in 1969, and served as a Cabinet minister in the Atal Bihari government of 1999-2004.

In an extensive interview with Rediff.com, Naik compared the Vajpayee-L K Advani era with the current Narendra D Modi-Amit A Shah era, spoke about two UP chief ministers -- Akhilesh Yadav and Yogi Adityanath -- during his tenure at the Raj Bhavan in Lucknow, the demand for a Bharat Ratna for Vinayak Damodar Savarkar, how Dr Manmohan Singh benefited from inheriting a booming economy from his predecessor Vajpayee, and how efficiently Modi is implementing the BJP's core agenda in India.

"If you look at these hundred days (of Modi's second term), these two important decisions -- revocation of Article 370 in Jammu and Kashmir and (criminalising) triple talaq -- no previous government has done what he has done, and successfully," Naik tells Prasanna D Zore in the first of a two-part interview.

How do you look at Narendra D Modi's evolution as prime minister in the context of the kind of changes he has brought in the political, economic and social spheres? What do you think he's likely to do in his second term?

One has to understand that he has worked as a successful chief minister. He was also targeted by the Congress in different ways (after the post Godhra riots of 2002). But he had withstood all such attacks on him.

Now, when his name was finalised by the party as a would-be prime minister, naturally, his best qualities have come out during the election campaign. I must say his oratory skills, firmness with which he feels about a particular issue, have come out well even in his Lok Sabha campaign.

The party (the BJP) made the decision that we lost two successive elections after Atal Bihari Vajpayee, we wanted to put our best foot forward and try our best to win that (2014 Lok Sabha) election.

His knowledge about social and political issues, and more than that, economic issues (has helped the party and nation in a big way). And the knowledge was in a way gained after he worked as a successful chief minister of Gujarat for four terms.

The way he approached the issues closer to the BJP's ideology created a huge political goodwill among the voters. His approach of taking the party's ideological moorings to the voters brought about a huge change in the way Indians began to accept the party's position.

The political atmosphere he created helped expose how Dr Manmohan Singh's government during the two tenures when he was prime minister was not doing much for the welfare of the people or not dealing with corruption with a strong arm.

There was frustration among the people and during his rule the country's economy did not do well despite he being an eminent economist.

One must understand that he inherited the economy of Vajpayee. The good days of Vajpayee preceded Manmohan Singh's first term.

Are you talking about Shining India?

No, I won't go by those words. While the economy performed quite well during Vajpayee's term, some people did not like the words (Shining India).

One must remember the trade embargo that India faced after we undertook the second nuclear test (in 1998 when Vajpayee was prime minister). All the developed countries put an economic embargo on India. Despite that, Vajpayee successfully steered the economy and that created an impression among people.

To Dr Singh's credit he too held his ground when India signed a nuclear deal with the US and showed how strong a leader he was.

That he did, but the point is that whether in his second term as an economist, could he deliver the goods? Whatever was, in a way, secured by Vajpayee, and by that I mean his Cabinet.

In addition to that, when anybody compares Vajpayee and Manmohan Singh, Vajpayee is far ahead of him. This always happens (that an incumbent government benefits from the good work of the preceding government).

The point is that India's economic performance in Manmohan Singh's second term was not good.

Talking about Prime Minister Modi, what measures of his in the social, political and economic spheres have created an impression among Indians?

Most importantly during his first five-year term, not a single charge of corruption has been proved against either him or his Cabinet colleagues.

Now, no corruption has its effect on the people at large.

So that is what you think is his legacy?

About Prime Minister Modi's influence in the social sphere, many BJP governments across India brought about the beef ban...

(intervenes) See these are side issues. Beef ban is an issue (dear to the BJP) but it did not have any impact on the voting pattern. But under his leadership, the way the Cabinet has functioned is more important.

The Opposition did pass many barbs about his 'achche din' slogan, but the way Modi has made this vocabulary popular and the way his political popularity has been increasing, I think the people at large have stated very clearly, in unambiguous terms, that these charges are unfounded and so they re-elected him with such a thumping majority.

Despite such a huge mandate, Prime Minister Modi has been not decisive when it comes to managing India's economy. Right now we are in the midst of a huge slowdown and his economic policies are being criticised for it.

If you look at the state of the economy of the developed countries, you will find they are actually facing a recession. And here we are in an (economic) slowdown. The interdependence of the economies of all the countries has so much increased that a recession in some parts of the world is affecting India too.

I get your point we are economically interconnected. But we also had 2008-2009 when there was global financial meltdown, but yet again to play the devil's advocate, under Dr Singh's leadership, India did not feel the brunt of that economic meltdown, but now under Prime Minister Modi's stewardship we are facing an economic crisis.

Last Friday, Finance Minister Nirmala Sitharaman slashed corporate income tax rates by from 34% to 25% -- for new manufacturing units it is 17.1% including the cess and surcharge. How bold a reform is that and will it help revive demand?

This is a big development and it indicates the alertness of the Modi government and the finance minister.

If things have changed, we have to respond to that. And that's why this (corporate income tax rate cut) is the response.

Yes, it (the economy) is slowing down. So, we have to take some bold measures and this is one such bold measure that will improve India's economy.

What more do you think will Prime Minister Modi do in his second term now that he has a bigger majority than he had in his first term? What more political shocks can India go through?

You may call it whatever, but it (revocation of Article 370) is a major decision which has been brought into practice. Only 100 days have passed.

If you look at these hundred days on the social side, these two important decisions -- revocation of Article 370 in Jammu and Kashmir and also triple talaq. No previous government has done what he has done, and I must say, successfully.

Triple talaq is a civil issue and it has been criminalised now. How does it help the Muslim woman if her husband after declaring triple talaq goes to jail? What happens to the family of that man?

When you think at the micro level, you should also think, if he has three children, and if he uses triple talaq to divorce his wife then that divorcee is not the only one affected; his three children are also affected.

We have been so backward that triple talaq, banned in many Muslim countries, allowed Indian Muslim men to divorce their wives and destroy their families in three seconds. So it's a very bold step.

Both these issues have been part of the BJP's manifesto and I am happy to say that they have been implemented in the first 100 days of Modi government's second tenure.

Quite a good show, I must say.

There's one more issue important to the BJP, and which has been part of the BJP's manifesto, coming up on October 18. The Supreme Court has asked for the hearings in the Ramjanmabhoomi-Babri Masjid case to wind up by October 18.
Do you think the Ram temple will be a reality before 2022 and the BJP will get an even bigger majority than it got in 2019?

Whatever has to come, automatically it will come. But the BJP has not looked at the issue ever from a political angle. The BJP has been raising the issue right since (Lal Kishenchand) Advani's Rath yatra; for some parties, it was a non-issue at that time.

This is an issue for which the BJP has worked very hard since the 1990s and if that (construction of a Ram temple at Ayodhya) comes (we will be happy about it). But the BJP never raised this issue for reaping political dividends.

Your comment on Prime Minister Modi and Union Home Minister Amit A Shah's style of leaderships and functioning. Critics are calling the BJP a two-man party.

Earlier also they were saying the same thing about Vajpayee and Advani. The point is, we must take into account what are the decisions, who is putting the energy, who is showing the light?

Now, both of them (Modi and Shah) are doing it. There are very few parties, when we compare the total political arena, the first best prime minister was Vajpayee and first best party president was Advani.

I would say that after them (Vajpayee-Advani combine), this is the second best (ruling) unit (the combination of Modi-Shah) in India.

We are lucky to have Narendra Modi and Amit Shah.

It seems that Mr Advani has been completely sidelined from decision-making in the BJP. He was appointed a member of the margadarshak mandal, wasn't he?

Ultimately, one has to consider the age factor. Given his age, the BJP has put Advani and Murli Manohar Joshi as margadarshaks. What's wrong in that?

The name margadarshak is one of respect. So, these two people who have toiled so hard and now that they have been appointed as margadarshaks. If one feels that by doing this, the BJP has sidelined them, then such people don't know how the BJP works.

Do you think this rule of age should also apply to Prime Minister Modi whenever he crosses the age of 75? Many Indians believe Modi will remain prime minister for the next 20 years or more.

The point is to decide where one should stop. That is very important. I'm telling you about Atal Bihari Vajpayee. We had our 2004 national convention here in Mumbai. In his address to party workers at Shivaji Park, Vajpayee said, 'Now I'm passing the baton to Lal Krishna Advani and Pramod Mahajan; they will carry our work forward.' So, people at the top do understand where to stop and when to stop.

Will the age rule apply to Modi?

Nobody said Vajpayee should say what he said at that convention. On the contrary, people felt he should not have said what he said. These are not rules; these are the ways and style of functioning.