Prime Minister Narendra Modi on Tuesday said his government brought in the Citizenship (Amendment) Act to correct "historical" injustices and recalled the Nehru-Liaquat pact to assert that the law fulfills India's "old promise" to religious minorities in neighbouring countries. 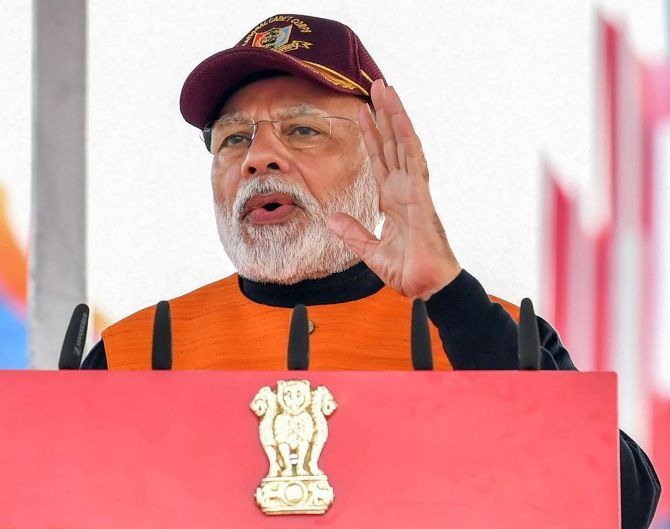 Addressing the Annual Prime Minister's National Cadet Corps Rally 2020, Modi also said the Jammu and Kashmir problem had persisted since Independence with some families and political parties keeping issues in the region alive. This had resulted in terrorism thriving.

He slammed Pakistan and said it lost three wars but continues to wage proxy wars against India.

Attacking opposition parties over their stand on the CAA, the prime minister said India had assured minorities in Pakistan and Afghanistan when it got Independence that they could come to the country if needed.

"This was Gandhiji's wish and also the intention behind the Nehru-Liaquat pact," Modi said.

The pact signed in 1950 between then prime minister Jawaharlal Nehru and his Pakistan counterpart Liaquat Ali Khan was aimed at allowing refugees to return to dispose of their property, return abducted women and looted property and unrecognise forced conversions.

"It is India's responsibility to give refuge to those people who have been oppressed due to their faith. These people have faced historical injustice... and to stop this and fulfil our old promise, we have brought the CAA," Modi said.

According to the amended citizenship law, members of the Hindu, Sikh, Buddhist, Jain, Parsi and Christian communities who have come from Pakistan, Bangladesh and Afghanistan till December 31, 2014 and facing religious persecution there will not be treated as illegal immigrants but given Indian citizenship. The law leaves out Muslims.

"Our government brought in CAA to give citizenship to such people but some political parties are in competition to do vote bank politics. For whose interest are they working? Why can't they see atrocities faced by these people in Pakistan There are many Dalits (among those who have been oppressed). These people have been oppressed... ," Modi said.

Modi said a sanitation job advertisement by Pakistani Army stated it was only open to non-Muslims, implying it was for Dalits.

He also referred to the Enemy Property Act and said those opposing this legislation are also against the CAA.

After partition, those who left India for Pakistan could still lay claim to their properties. The Enemy Property Act 2016 allows transfer of enemy property from the enemy to other persons.

Targeting previous governments, Modi said they treated the proxy war by Pakistan as a law and order problem.

"But even when our armies would ask for action, they would not go ahead," he said, slamming the "inaction" of previous governments at the Centre.

The prime minister said not just Jammu and Kashmir but other parts of the country are also peaceful right now and his government had managed to address the aspirations of the northeast region which were neglected for decades.

Listing the achievements of the government, the prime minister referred to the Bodo agreement, triple talaq and the abrogation of provisions of Section 370 in Jammu and Kashmir.

He also termed "historic" the pact signed by the Centre with insurgent group National Democratic Front of Boroland and two other outfits.

Modi said his government has taken a series of steps for the northeast region of the country and is holding talks with all stakeholders with an open heart.