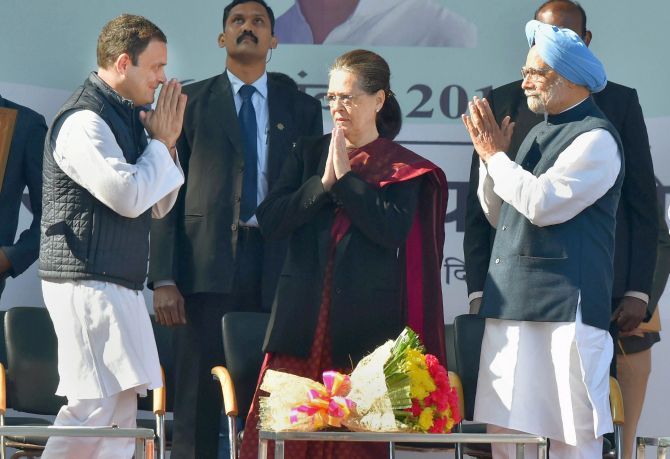 Congress leader Sonia Gandhi on Wednesday launched a scathing attack on the Modi government, alleging that 'bluff, bluster and intimidation' have been its philosophy, as her party vowed to defend the institutions under 'attack' from the ruling dispensation.

Addressing the Congress Parliamentary Party's general body meeting, Congress president Rahul Gandhi claimed that Prime Minister Narendra Modi does not have a 'single step' to stand on and his 'bluster' has gone in the wake of the Rafale deal 'revelations'.

He described the Rafale deal as a 'systematic robbery' from the Indian defence forces and alleged that not just the fighter jet contract, but every single deal under the Modi government had been managed in the same way.

One man is chosen and then the whole procedure is bypassed, he alleged at the meeting that was attended by Congress Parliamentary Party leader Sonia Gandhi, former prime minister Manmohan Singh, Congress' leader in Lok Sabha Mallikarjun Kharge and Leader of Opposition in Rajya Sabha Ghulam Nabi Azad among others.

She also praised her son for bringing in fresh energy and putting together a team which blends experience and youth.

The Congress Parliamentary Party leader alleged that there was an 'all-pervasive atmosphere of fear and strife' across the country.

"We go to the forthcoming Lok Sabha polls with renewed confidence and resolve. Our victories in Rajasthan, Chhattisgarh and Madhya Pradesh have given us new hope," Sonia Gandhi said.

"Our opponents were earlier projected as being invincible. The Congress president took them head-on, mobilising and motivating lakhs of our workers who, with him, gave their all. We won in what were believed to be their strongholds," the United Progressive Alliance chairperson said.

Slamming the Modi dispensation, Sonia Gandhi said the foundations of 'our democratic and secular republic' have come under 'systematic assault' by the government.

The very values, principles and provisions of the Constitution have been under continued attack from the Modi government, she alleged.

"Institutions have been subverted. Political opponents have been hounded. Dissent has been suppressed. Freedom of speech -- the most basic of all freedoms -- has been sought to be curtailed and silenced," the UPA chairperson said.

"Bluff, bluster and intimidation have been the governance philosophy of the Modi government. Truth and transparency have been brazenly tossed aside," Sonia Gandhi alleged.

He alleged that the government's 'attack has been systematic'.

There is only one party that speaks for the entire country, the Congress chief said, adding that every other party speaks for a part of the Indian society.

Rahul Gandhi alleged that the Rashtriya Swayamsevak Sangh and the Bharatiya Janata Party divide the nation and only speak for a part of the country.

The Congress is the only institution that defends the idea of India and that is why it is its duty to defend the institutions of the country, he said.

"You will get a shock as to what is going to happen in 2019 and this would not have been possible if you had not defended our position in Parliament," said the Congress chief, lauding the lawmakers for their perseverance.

Sonia Gandhi, in her address, alleged that the last five years have been a time of unprecedented economic stress and social strain for the country.

"The northeast is burning. Alienation in Jammu and Kashmir has scaled new heights. Dalits, adivasis and minorities are being targeted. Farmers are facing unprecedented distress.

"The youth is staring at the abyss of despair with jobs being destroyed on a scale that has never happened before," she said, lashing out at the Modi government's policies.

Sonia Gandhi also praised the Congress president for his leadership after taking over the reins of the party in December 2017.

Sonia Gandhi said the people of the country were wise and know that 'jumlabaazi' (rhetoric) is no substitute for sensitive and responsive governance.

The people know that 'imagery, stage management and marketing gimmicks' can be no substitute for responsible and accountable governance, she said. 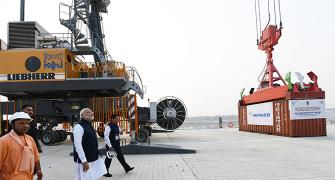 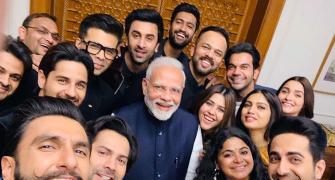 Why did Bollywood stars meet Modi?