News
Business
Movies
Sports
Cricket
Get Ahead
Money Tips
Shopping
Sign in  |  Create a Rediffmail account
Rediff.com  » News » BJP used Raj Thackeray as pawn, will have to pay for his own karma: NCP

BJP used Raj Thackeray as pawn, will have to pay for his own karma: NCP

Latching onto an Uttar Pradesh-based BJP MP's warning to Raj Thackeray that he would not be allowed to enter Ayodhya till he apologised for "humiliating" north Indians, the Nationalist Congress Party on Thursday accused the saffron party of using the Maharashtra Navnirman Sena chief as a pawn and cutting him to size as he showed signs of getting bigger. 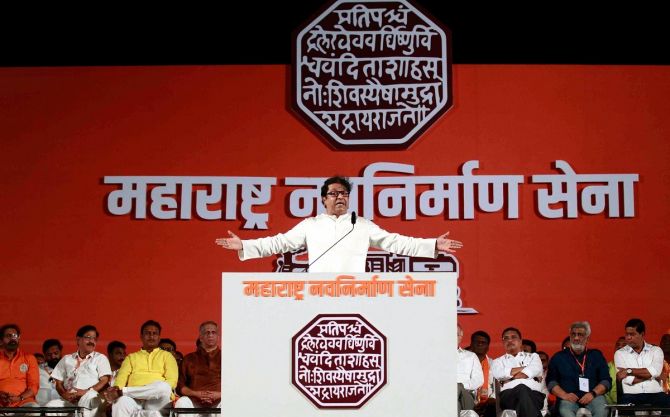 Maharashtra NCP's chief spokesperson Mahesh Tapase also accused the Bharatiya Janata Party of following the use-and-throw policy and added that Raj Thackeray "will have to pay for his own karma".

Tapase was referring to an old agitation of MNS, which earlier raised the cause of sons-of-the soil against north Indian students appearing for railway examination in Kalyan in the state.

BJP MP Brij Bhushan Sharan Singh on Thursday opposed Thackeray's proposed visit to Ayodhya on June 5 and warned that he will not be allowed to enter the Uttar Pradesh city till he tendered a public apology for humiliating north Indians.

The MP from Kaiserganj Lok Sabha constituency and one of the leaders of the Ram Mandir movement, in a tweet said, "Will not allow Raj Thackeray, who humiliates north Indians, enter the Ayodhya border."

"Before coming to Ayodhya, Raj Thackeray should apologise to all North Indians with folded hands," he said.

Thackeray of late made a strong pitch for removing loudspeakers from mosques and added failure in doing so would lead to MNS workers playing 'Hanuman Chalisa' outside these religious places.

"The BJP has snapped Thackeray's Hindtuva kite before it flew higher. One has to pay for his/her karma," Maharashtra NCP chief spokesperson Mahesh Tapase said in a statement.

Meanwhile, Maha Vikas Aghadi ally Congress said that the issue of loudspeakers is not limited to only one section of society now and will affect everybody.

Congress leader and Maharashtra revenue minister Balasaheb Thorat said in Aurangabad on Thursday such issues are being raised by opposition parties to divert the attention of people from inflation.

Loudspeakers have become a hot-button issue in the state after MNS chief Raj Thackeray demanded the removal of loudspeakers from mosques.

"Fuel and gas prices have gone up and have led to price hikes for various commodities. On the other hand, the Maha Vikas Aghadi government in the state has handled the coronavirus pandemic transparently and worked to solve people's basic problems," the minister said.

"The issue of loudspeakers and the guidelines of the Supreme Court on it will become wider now, affecting everybody (every festival)," Thorat said.

Referring to the same, Tapase asked whether Yogi Adityanath "who was praised" by Thackeray would meet the MNS chief "against the sentiment" of the people of Uttar Pradesh.

Thackeray, Crasto charged, did nothing for Maharashtra and now is allegedly trying to woo the same north Indians to remain relevant in politics.

"BJP used him as a pawn and when he showed signs of getting bigger, they are cutting him to size," Crasto said on Twitter.

The NCP functionary also accused the BJP of hitting two birds with one stone, gaining sympathy of north Indians through their Parliamentarian, who gave the warning and on the other hand, cutting Thackeray to size. Only 24 temples in Mumbai have nod for loudspeaker 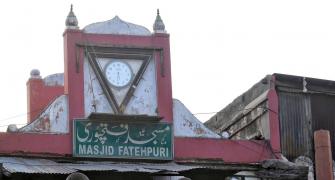 Amid loudspeakers row, 5 Maha mosques say no to DJ 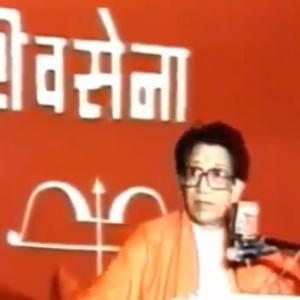 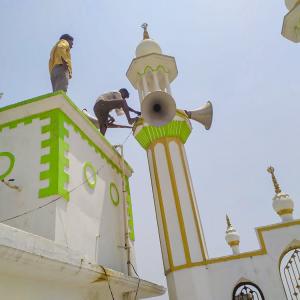 46,000 loudspeakers removed from UP religious places