Congress president Sonia Gandhi on Thursday hit out at the Bharatiya Janata Party, accusing it of making shameless attempts to "subvert democracy" in Maharashtra and blatantly sabotage the three-party alliance from coming to power in the state. 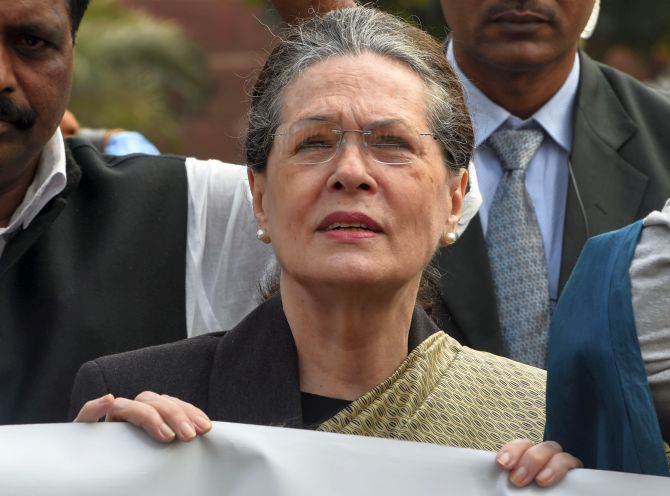 Addressing the Congress Parliamentary Party meeting in Parliament House, she also attacked the governor of the state, Bhagat Singh Koshyari, saying he had acted in an "unprecedented and reprehensible manner".

"There is no doubt that he (Koshyari) acted under the instructions of the prime minister and the home minister. The BJP's pre-poll alliance did not hold because of its own arrogance and over-confidence," Gandhi said at the meeting attended by all Congress MPs from the Lok Sabha and the Rajya Sabha.

"Every effort was made to blatantly sabotage the three-party alliance government formation, but we appealed to the Supreme Court and the Modi-Shah government was totally exposed. Let me assure you, we three parties are united in our resolve to defeat the BJP's sordid manipulations," she added.

Gandhi said it was clear that the Modi-Shah government is "bankrupt" of decency and clueless on how to manage the grave problems facing the country. She added that the economic crisis in the country was deepening, growth was declining, unemployment growing and investment not happening.

"There is worsening distress among farmers, traders and small and medium businesses. Consumption, especially in rural areas, is falling. Exports are declining. And prices of essential food commodities are rising, causing hardship to households. Instead of tackling the problem, the Modi-Shah government is busy fudging statistics or, indeed, not publishing them at all," the Congress president said.

"The public sector has been put on the block, in all probability, to be sold off to a few favoured business people. What will be the fate of the thousands of workers at those enterprises? Lakhs upon lakhs of salaried and ordinary families are worried about their deposits in banks," she said.

The Congress president also attacked the government on the RCEP issue, National Register of Citizens, reading down of Article 370, electoral bonds and snooping allegations among other things.

"Because the NRC project implemented by the BJP government in Assam, monitored by the Supreme Court, has not fulfilled the RSS-BJP expectations and propaganda, there is now clamour in the ruling party for a fresh NRC in that state. The home minister is also speaking of unleashing an NRC in the entire country - a step that will only lead to more fear and panic," she said.

Gandhi claimed that democracy was again subverted when the special status of Jammu and Kashmir under Article 370 was abrogated under the "blatantly false promise of a new beginning" to Jammu, Kashmir and Ladakh.

She added that the ground realities were completely different from the "fictitious images" conjured up by the Modi-Shah government.

"The agony, anguish and humiliation of the people continues. Former chief ministers, who in the past were political allies of the BJP, MLAs, political workers and ordinary people who believed in the idea of India and abided by the Constitution of India have been under house arrest for months. Even children are not being spared in the crackdown," she said.

Speaking on the issue of the revelations of surveillance through PEGASUS, a spying software, Gandhi questioned the silence of the government over it's role in "violating the fundamental rights of the citizens".

She further said that there were a number of "infirmities" in the electoral bonds scheme, which she alleged were "pushed through" by the prime minister only to benefit the ruling party and to protect its financiers -- while removing wholesale any checks and balances in this sensitive matter of political funding.

Congratulating her party members over the election results in Haryana and Maharashtra, the Congress president said it proved those predicting doom were hopelessly wrong.

"These are undoubtedly extraordinary times when our fortitude and resilience are under the greatest of tests. But collectively we will turn the tide, not for our sake but for the sake of the Constitution, for the sake of a liberal and pluralistic democracy and for the sake of our country and our people," she said.