'In the end, it was possibly Pawar's pow-wow with Modi that helped her to come to a decision,' says Amulya Ganguli. 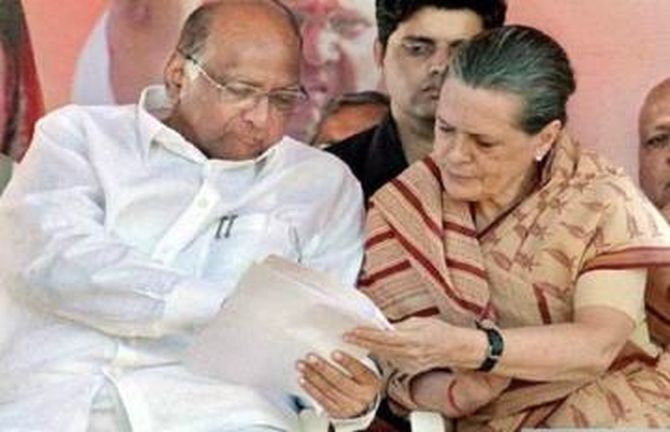 f it is possible to be more optimistic about a Shiv Sena-NCP-Congress government in Maharashtra than before, the reason is that Sonia Gandhi hasn't lived up to her penchant for never missing an opportunity to miss an opportunity, as a Wikileaks revelation about an American diplomatic message about her said.

Even then, the time which the interim Congress president took to make up her mind on whether or not her party would team up with the Shiv Sena and the Nationalist Congress Party in Maharashtra would have strained the forbearance of any negotiator.

In the end, it was possibly Sharad Pawar's pow-wow with Narendra Damodardas Modi that helped her to come to a decision.

True, it was not an easy one to take.

For an avowedly secular party like the Congress to join hands with an unabashedly communal outfit like the Shiv Sena will entail the overturning of a number of shibboleths.

For one, the Congress will be wary about alienating the Muslims which it still regards as a part of the party's support base.

The reservations voiced by its partner in Kerala, the Indian Union Muslim League, about tying up with the Shiv Sena is noteworthy in this respect.

For another, there is no certainty about how long an alliance with the Shiv Sena will last given the latter's mercurial politics which is made all the more dicey by a propensity for violence.

It is easy to say that the issues of governance outlined in a common minimum programme can steer clear of controversies such as demanding a Bharat Ratna for Vinayak Damodar Savarkar.

But a government will hardly be able to project an image of togetherness if there are too many of these contentious subjects where the putative allies stand at opposite ends of an ideological spectrum.

On the other hand, there is a low-hanging fruit for the Congress to grab.

It is the Bharatiya Janata Party's ouster from the political scene of one of the country's most important states which is India's financial capital as well as the home of Bollywood.

The resultant blow to the BJP's prestige will be devastating less than half a year after its Lok Sabha triumph.

It will not only puncture the BJP's hauteur, but also show that its supposed trump card of a surgical strike on Kashmir's special status has not impressed the electorate as much as it had presumed.

Taken together with the BJP's inability to secure a majority in Haryana, the setback in Maharashtra will generally be interpreted as a sign that the party's forward march may be grinding to a halt.

No other party is more conscious of the advantages of stopping the BJP in its tracks than the Shiv Sena which has been resentful of its eviction from the No 1 position in the saffron combine by Big Brother.

For the Sainiks, therefore, the latter's comeuppance is a consummation devoutly to be wished.

Aware of the gains from a rupture with the BJP and an alliance with the NCP and Congress, the Shiv Sena has apparently toned down some of its earlier stridency.

The calling off of Uddhav Thackeray's Ayodhya trip and the possibility of the party opposing the citizenship bill are some of the indications that a leopard can change its spots -- as a chameleon changes its colour depending on its mood.

So far as the 'secular' camp is concerned, a sojourn in the corridors of power in Maharashtra will be a boost to its morale only a few weeks after the humiliation it faced when droves of its members made a beeline for the BJP.

Now these turncoats will wonder how they could have misread the political tea leaves.

After the Congress's successes in the Rajasthan local body elections, a stint in power in Maharashtra will mean that all is not yet lost for the party as it seemed when Rahul Gandhi threw in the towel after the Lok Sabha defeat.