A homeguard jawan was driven for about 200 metres on the bonnet of an SUV, belonging to a Bharatiya Janata Party leader, after he tried to stop the vehicle as it was plying on the wrong side of the road here, witnesses said. 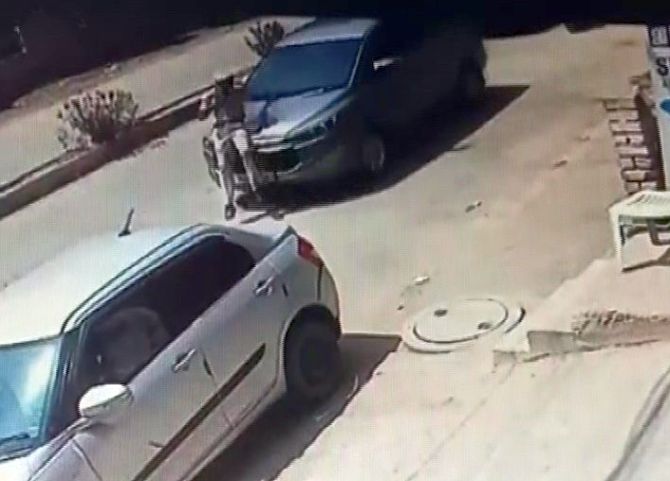 BJP leader Satish Khola, who was inside the vehicle when the incident happened on Monday, said there was no "intention to do anything deliberately".

The incident was captured by people on their mobile phones and some videos have gone viral on social media.

Monu Yadav, the homeguard jawan, said he saw the SUV plying on the wrong side of the road and tried to stop it. He said the driver, Sonu, however, allegedly kept driving on with him on the bonnet. Yadav said he was driven for about 200 metres. He has not received any injury in the incident.

The driver told reporters, "I was trying to stop the vehicle on one side, but he clung on and I immediately brought the vehicle to a halt,"

Khola, who is currently the coordinator of BJP's Professional Cell and who had previously served as the chief of a district unit of the party, expressed regret over the incident.

"The railway crossing here was closed for nearly 25 minutes. There was a huge rush of vehicles. As my driver was signalled to stop, he tried to find a spot to park on one side as it was causing massive traffic jam. There was no intention to deliberately do anything. I express regret if anyone had to face trouble," Khola told reporters.

The driver admitted that he was driving on the wrong side.

In a viral video, the homeguard jawan can be seen being driven on the vehicle's bonnet. As the driver stops the vehicle, people gathered around.

Khola is seen coming out of the SUV and trying to pacify the angry public which was asking for the driver, who was sitting inside the car.

The people hurled abuses at the driver questioning him how he did not care about a human life.

The BJP leader called the police to control the situation.