'It is inevitable when he pleases those who share his Hindutva ideology that at the same time he can alienate those who do not feel he speaks for them.' Lance Price is the author of The Modi Effect, a biography of the prime minister. He worked as a journalist for the BBC before becoming a special advisor to then British prime minister Tony Blair. After that, he took on the role of director of communications for the Labour Party, coordinating its election campaign of 2001

"Modi is capable of earning great adoration from those who have faith in him," Price, below, tells Rediff.com's Shobha Warrier.

Were you curious before the 2019 election to know the kind of effect Modi would have when he faced the Indian people for the second time?

Modi was able to dominate the election campaign in 2014 with his very effective and original techniques. I believed 2019 would be more difficult for him because he is no longer a novelty and many of his ambitious promises from five years have not been met. 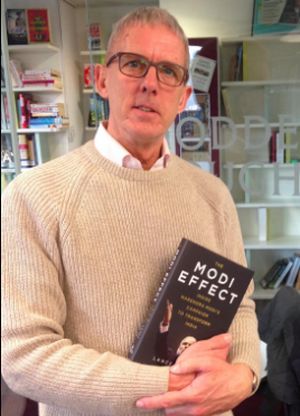 Watching from Britain, were you surprised by the way people of India put their faith in Modi again?

It is undoubtedly a great achievement for Modi to have a second big win. In this, he did the same as Tony Blair in the UK, who I worked for and helped to a second landslide when he was prime minister.

Modi is adored by a lot of people while another section of the Indian people hates him.
As a person who has met him while writing the book, why do you think people have such extreme emotions for him?

Modi is capable of earning great adoration from those who have faith in him. He knows how to appeal directly to his most enthusiastic supporters and they have turned out for him again.

But he can be a divisive politician and it is inevitable when he pleases those who share his Hindutva ideology that at the same time he can alienate those who do not feel he speaks for them.

Do you think all over the world, politics is moving towards the Right?

Politics in many parts of the world is being dominated by populists and in many ways, Modi is a populist. There are populists on the Left as well as the Right. But the mainstream parties are facing a big challenge that they have to address.

One reason is certainly that the forces of globalisation have left some people feeling alienated and worried that those in power do not listen to them.

But these challenges can be met because populism is not good for the international cooperation needed to confront the many global issues that confront us all no matter where we live.