A slugfest erupted between the Congress and the Bharatiya Janata Party on Sunday following a report in the Wall Street Journal claiming that Facebook ignored applying its hate speech rules to politicians of the ruling party in India. Seizing on the report, Congress leader Rahul Gandhi accused the BJP and Rashtriya Swayamsevak Sangh of spreading "fake news" using Facebook and WhatsApp to influence the electorate, triggering a sharp counter-attack from Union IT minister Ravi Shankar Prasad who reminded the opposition party of the Cambridge Analytica issue.

The Congress demanded a probe by a joint parliamentary committee into the charges mentioned in the report, saying they threaten the foundation of Indian democracy and need to be investigated.

Hitting back, Prasad tweeted, "Losers who cannot influence people even in their own party keep cribbing that the entire world is controlled by BJP and RSS.”

“You were caught red-handed in alliance with Cambridge Analytica and Facebook to weaponise data before the elections and now have the gall to question us," he said.

His strong reaction came after Gandhi took to Twitter to slam the BJP and RSS following the report and posted a screen grab of it.

"BJP & RSS control Facebook & Whatsapp in India. They spread fake news and hatred through it and use it to influence the electorate. Finally, the American media has come out with the truth about Facebook," Gandhi said.

In the report published on Friday, the United States newspaper cited interviews with unnamed Facebook insiders to claim that one of its senior India policy executives intervened in internal communication to stop a permanent ban on a BJP MLA from Telangana after he allegedly made communally charged posts.

There was no immediate comment on the issue by Facebook, for whom India is one of the fastest growing markets globally with over 340 million users.

Countering Gandhi's remarks, Prasad also said, "The fact is that today access to information and freedom of expression has been democratized. It is no longer controlled by retainers of your family and that is why it hurts."

Prasad's reference to Cambridge Analytica was about the allegations the Congress faced in 2018 that the UK-based firm offered the party data mining of Facebook posts to influencing voters in 2019 Lok Sabha polls. Congress had rejected the charges.

Congress leader Shashi Tharoor, who heads the Parliamentary Standing Committee on Information Technology, said the panel would like to hear from Facebook about the report.

"The Parliamentary Standing Committee on Information Technology would certainly wish to hear from Facebook about these reports and what they propose to do about hate-speech in India," he tweeted.

BJP MP Nishikant Dubey, reacting to Tharoor's comments, said the subjects which are permissible and are in accordance with rules of parliamentary standing committees could be raised.

But at the same time, he added that these panels should not be made a political platform by members to satisfy "ego of their respective party leaders".

Congress spokesperson Ajay Maken, at a virtual press conference, demanded a JPC probe into the charges that Facebook ignored its hate speech policy in dealing with BJP lawmakers.

He said Facebook global should also hold a probe to ascertain the alleged links of some of its employees with the ruling party, to help protect its own credibility. 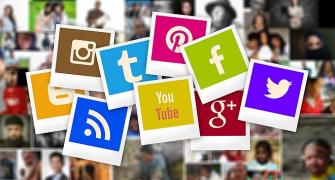