The Bharatiya Janata Party on Tuesday accused Chief Minister Mamata Banerjee, who is Trinamool Congress's Bhabanipur bypoll candidate, of violating the model code of conduct (MCC) by participating in a programme where the West Bengal government announced a grant of Rs 50,000 to each Durga puja organising committee ahead of the state's biggest festival. The West Bengal government has announced the grant for the second year in a row primarily to make up for lost sponsorship and extra expenditure due to the Covid pandemic.

Chief Secretary H K Dwivedi on Tuesday announced free licences as well as a 50 per cent discount on the power tariff for the committees organising Durga puja this year.

He announced this at the programme where Banerjee met several Durga puja organisers from Kolkata and other parts of the state.

A three-member state BJP delegation led by party state vice-president Pratap Banerjee met the chief electoral officer in Kolkata and urged the EC to take action against Banerjee for violating the model code of conduct and also restrain her from participating in the by-election.

"We have requested the Election Commission to take action against Bhabanipur by-poll candidate Mamata Banerjee for violating the MCC by announcing cash rewards for Durga Puja clubs despite the declaration of the bypolls date and the poll guidelines being in place. We have also demanded that she should be restrained from participating in the by-poll for violating the MCC," BJP leader Shishir Bajoria said.

The TMC leadership refused to attach much importance to BJP's demand.

"The BJP after its humiliating defeat (in the April-May assembly poll) seems to have lost it. First of all the chief minister did not make any announcement. It was the chief secretary who made all the announcements.

"Secondly, there is nothing new in the announcements. Last year too similar announcements were made by the state government.

"The BJP knows they have lost the bypolls so they are now trying to make an issue out of a non-issue," TMC state general secretary Kunal Ghosh said. 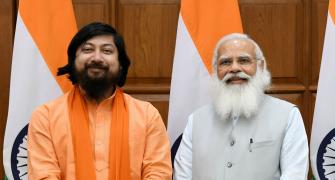