The Bharatiya Janata Party has managed to puncture the Opposition's claims that the party is anti-minority by winning more than 50 per cent of the Lok Sabha seats in 90 'minority-concentration' districts identified in 2008 by the then United Progressive Alliance government. 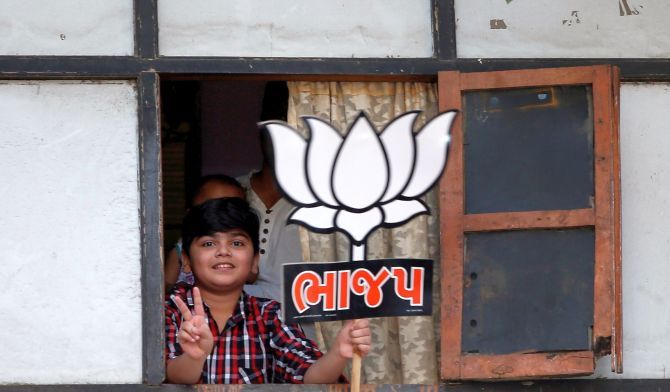 IMAGE: The opposition parties have been accusing the BJP of not doing enough for the minorities and also aiding and abetting attacks on them. Photograph: Amit Dave/Reuters

Besides a considerable minority population, these districts have both socio-economic and basic amenities indicators below the national average.

An analyst claimed that Muslims did not vote en bloc in favour of one party or candidate this time.

The opposition parties have been accusing the BJP of not doing enough for the minorities and also aiding and abetting attacks on them.

Nearly 20 per cent of the country's 130 crore people are Muslims.

In the minority-concentration districts, the BJP gained the most in West Bengal, which has 18 such seats. In Raiganj in Uttar Dinajpur district which has a Muslim population of nearly 49 per cent, BJP's Debasree Chaudhuri defeated TMC's Agarwal Kanaialal by 60574 votes.

In Maldaha North seat in Malda, the party's Khagen Murmu won defeating TMC's Mausam Noor by a margin of 84,288 votes. The seat has nearly 50 per cent Muslim population.

In Coochbehar seat which has a Muslim population of around 30 per cent, BJP's Nisith Pramanik got the better of his nearest rival TMC's Paresh Chandra Adhikary by 54,231 votes.

In Hooghly seat (20 per cent), Locket Chatterjee of the BJP defeated his TMC rival Ratna Dey (Nag) by a margin of 73,362 votes while S S Ahluwalia of BJP won the Burdwan-Durgapur seat by a slender margin of 2,439 votes defeating his nearest AITC rival Mamtaz Sanghamita. The seat has around 15 per cent Muslim population.
The UPA government in 2008 had identified the 90 minority-concentration districts under a development programme that focussed on education, health and skill development in these districts.

Rampur, Nagina, Moradabad, Sambhal and Amroha are among the 20 Lok Sabha seats in Uttar Pradesh where Muslim voters are in a very large number.

Though the BJP performed well in the state, ensuring that the Samajwadi Party-Bahujan Samaj Party-Rashtriya Lok Dal combine does not get a cake walk, the 'mahagathbandhan' bagged these five seats.

In Rampur, where Muslims account for nearly 50 per cent of the voters, veteran SP leader Azam Khan defeated BJP candidate and actor-turned-politician Jaya Prada by over one lakh votes.

In Amroha, Kunwar Danish Ali, who had defected from the Janata Dal-Secular and had joined the BSP just ahead of the polls, emerged victorious trouncing sitting BJP MP Kunwar Singh Tanwar.

The Congress had fielded six Muslim candidates in Uttar Pradesh, but none of them won.

In the entire state, Muslims account for nearly 20 per cent of the population.

In the 2014 Lok Sabha polls, not a single Muslim candidate won and the jinx was broken only during Kairana bypoll when the seat was wrested from the BJP by Tabassum Hassan, the joint opposition candidate, who had contested on RLD ticket.

In Bihar, there are seven such seats, and in Kishanganj, which has around 65 per cent Muslim population, Congress's Mohd Javed defeated Janata Dal-United's Syed Mahmood Ashraf by 34,466 votes.

In Araria (45 per cent), BJP's Pradip Kumar Singh defeated sitting RJD MP Sarfaraz Alam by 1,37,241 votes while in Katihar (40 per cent) Congress's Tariq Anwar (sitting MP, who won the seat on an NCP ticket) lost to Dulal Chandra Goswami of the JD-U by 57,203 votes.

In Assam, the Congress won two of the seats where there is a sizeable Muslim population -- Abdul Khaleque in Barpeta (over 45 per cent) and Pradyut Bordoloi in Nowgong (over 34 per cent). AIUDF chief Badruddin Ajmal emerged winner in Dhubri, where the Muslim population is over 65 per cent. 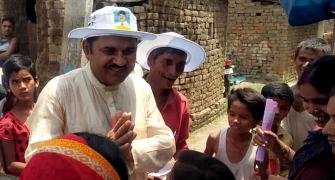