Seven Bihar police personnel, including Circle Inspector, Manish Kumar, were suspended in Kishanganj Bihar on Sunday on the charges of dereliction of duty. The seven police personnel ran away leaving the Station House Officer (SHO) on-site alone when a mob attacked them on Saturday in West Bengal's Pantapada.

On the recommendation of SP Kumar Ashish, IG Suresh Kumar Chaudhary of Purnia Range suspended the policemen for leaving the SHO of Kishanganj Police Station alone on the incident site.

"Strict punishment will be given to all seven police personnel after carrying out departmental action," said SP.

The officer had ventured into the neighbouring area with his team under Panjipara police station while conducting raids to look for the culprit in connection with bike theft where a mob attacked the team.

The SHO was brutally beaten and throttled to death and his body was left abandoned at the spot.

Later his body was taken to the Islampur hospital in Bengal.

The deceased police official was a 1994 batch inspector and a resident of Janakinagar in Purnia district.

He was posted to Bihar's Kishanganj Police Station last year.

During a meeting on Friday, SP Kumar Ashish had issued notice to all station heads regarding the growing incidents of robbery in the region and also assigned them the task to arrest the warrantees. 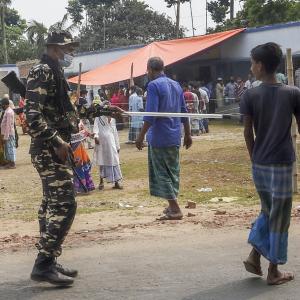