The Bharatiya Janata Party has said that it was unhappy with the recommendations, especially the compensation, suggested by the Group of Ministers in regard to the Bhopal tragedy case.

Madhya Pradesh Deputy Chief Minister Babulal Gaur, who is also a member of the GOM, conveyed his displeasure at the end of the meeting on Monday saying the party was not happy with the compensation offered to the victims and added that the state government wanted more packages.

The party will come out with a detailed policy statement on the case on Tuesday, Gaur said.

Eyewitnesses to the meeting said Gaur had been bitter at the end of the GOM meeting on Monday.

Gaur said he was unhappy that the Planning Commission's recommended relief of Rs 983 crore was reduced to half the amount.

"Why such indiscrimination to the BJP government in Madhya Pradesh?" he said.

Union Minister Kamal Nath had reportedly supported Gaur in regard to the compensation amount at the GoM meet, however was forced to agree with the other Cabinet ministers.

However, Union Home Minister P Chidambaram has reportedly instructed Gaur that he must convey his criticisms at the GoM meet and not to the media. 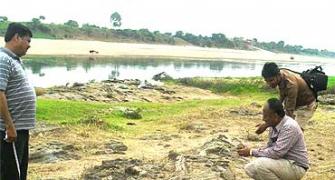 Bhopal tragedy: What the GOM focuses on