Not only is there a possibility for a conventional retaliation by Pakistan, there could also be terror attacks.
Arup Roychoudhury reports. 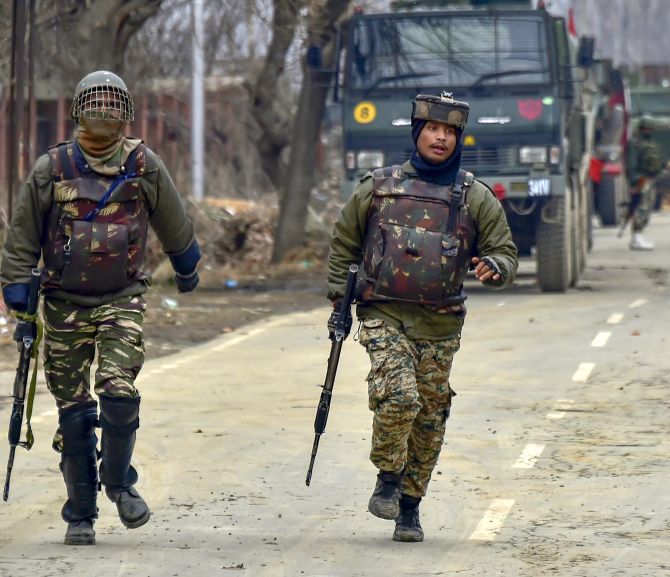 The air strikes on Tuesday are significant, but also part of a larger process -- including both military and diplomatic options -- that will have to continue, say former Indian Air Force officers and defence experts.

Not only is there a possibility for a conventional retaliation by Pakistan, they warn there might also be terror attacks. India will also have to make its case to the international community.

"There are a whole range of essential actions we have to take. One cannot rest on this one air attack," says Air Chief Marshal Anil Y Tipnis (retd), who was chief of the air staff during the Kargil conflict in 1999.

"We need to continue. First, we need to launch a diplomatic offensive to explain to the rest of the world why this action was taken, the extent of the damage on terror camps, and how careful have we been in not inflicting any collateral damage," Air Chief Marshal Tipnis says.

Analysts say the global community is sympathetic to India, but the diplomatic and political class should continue to drive home the message.

"India has got a good story. We should tell it in a persuasive way. In the 21st century, it is not enough to win a war; you have to win the narrative as well," says Commodore C Uday Bhaskar (retd), director, Society for Policy Studies, a New Delhi-based think-tank.

"We pitch the story very well in a domestic political context. But on the external front we need to have a more persuasive story. Beijing has to come on board, that is the challenge," adds Commodore Bhaskar.

Experts say the terminology used by the Indian establishment so far drives home the point that the Indian fighters crossed into Pakistani airspace only with the intention of hitting terror camps.

"These words are significant. India is trying to move away from narratives of retribution, revenge. That is desirable," says Commodore Bhaskar. He warns against the narratives being spun for the electorate ahead of the the Lok Sabha election.

"You haven't seen any adverse reaction from any of the global leaders. There should be a clear message that we are targeting specific terror installations, and we don't want escalation. So far, nobody in the government has gone and said anything which can be misconstrued," says Air Marshal N V Tyagi (retd), a former deputy chief of air staff.

India's global outreach should continue with External Affairs Minister Sushma Swaraj, who is in China for a China-Russia-India trilateral meeting, says Commodore Bhaskar.

After that comes the meeting of the Organisation of Islamic Cooperation's Council of Foreign Ministers, to be held in Abu Dhabi on March 1-2.

India will be the 'guest of honour', a first for a non-Muslim-majority nation. Islamabad has decided to counter the latest surgical strike at the OIC, a forum it sees as home turf.

Commodore Bhaskar and Air Marshal Tyagi say India will have to be ready for a non-conventional response.

"We also have to be prepared for a terror attack. Pakistan has the ability to respond militarily and through proxy forces," says Commodore Bhaskar.