Shiv Sena supremo Bal Thackeray, who was admitted to Lilavati Hospital in suburban Bandra two days ago, was "fine", the doctor treating him said.

"He is fine, but will be kept in the hospital for another two-three days," said chest physician Dr Jalil Parkar.

He refused to specify the exact ailment. "I would not discuss his medical issues," he said.

Sena sources had said that Thackeray was hospitalised only for a routine check-up.

His son and Sena executive president Uddhav Thackeray underwent angioplasty procedure at the same hospital a few day ago. 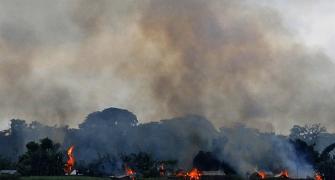 BJP sharpens attack on PM, calls him a mute spectator