Acting on orders of the Election Commission, the police on Monday filed an FIR against Bharatiya Janata Party Lok Sabha candidate from Bhopal Sadhvi Pragya Singh Thakur for her remark that she was "proud" of her participation in demolition of the Babri Masjid at Ayodhya in 1992, an official said. 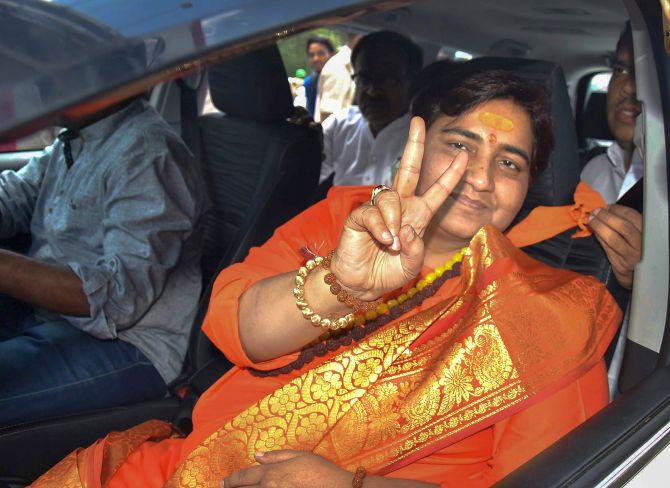 The EC on Saturday had issued a show-cause notice to Thakur, an accused in the 2008 Malegaon bomb blast accused currently out on bail, over her remark made during an interview to a news channel.

Earlier in the day, the EC had asked the TT Nagar Police Station to file an FIR against Thakur for allegedly violating the model code of conduct with her statement on demolition of the Babri Masjid.

He also said a comprehensive report on Thakur's statements on the Babri Masjid demolition and 26/11 martyr and Maharashtra Anti-Terrorism Squad chief Hemant Karkare, made over the last few days, has been sent to the EC.

During the interview, Thakur was quoted as saying "Ram Mandir hum banayenge aur bhavya banayenge, hum todne gaye the dhancha, maine chadhkar toda tha dhancha, iss par mujhe bhayankar garv hai. Mujhe Ishwar ne shakti di thi humne desh ka kalank mitaya hai (A grand Ram temple will be built. I had gone to demolish the structure and had climbed atop it to break it. I am tremendously proud of it. God gave me strength to wipe off a blot on this country)."

The EC notice had said Thakur's remark was a violation of chapter 4 of the model code of conduct, which pertains to maintenance of harmony between castes, communities, religious, linguistic groups.

Reacting to the notice, Thakur had on Sunday told reporters, "I am not backtracking (from the remark). The structure was demolished and a grand temple would be constructed. Nobody can stop me from constructing a grand temple (at the disputed site)."

The EC had on Saturday issued a show-cause notice to Thakur over her controversial remark about Karkare.

Thakur had claimed Karkare died during the 26/11 Mumbai terror attacks as she "cursed" him for "torturing" her when he probed the blast case as chief of the ATS.

She has submitted her reply to the EC over her anti-Karkare statement, which she later withdrew amid a raging controversy.

"We had issued a notice to Sadhvi Pragya Singh Thakur for her controversial statement regarding martyred police officer in Mumbai's 26/11 terror strike (Karkare).

"Sadhvi has submitted her reply and the same along with the report of the district returning officer has been sent to the EC for further action," Rao had earlier told reporters.

Six people were killed and over 100 injured when an explosive device strapped on a motorcycle went off near a mosque in Malegaon, a town in north Maharashtra, on September 29, 2008.

On Monday in Kolkata, BJP president Amit Shah defended his party's decision to field Thakur as its Lok Sabha candidate, saying allegations against her are false and the real culprits in the Malegaon blast case have evaded the law.

Thakur is pitted against Congress candidate Digvijaya Singh in the Bhopal Lok Sabha constituency, which will vote on May 12. 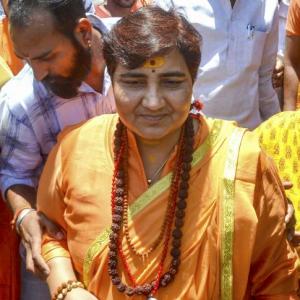