Baba Ramdev is back in New Delhi

Twenty days after he was bundled out of Delhi, yoga guru Ramdev on Sunday came back to the national capital to visit a woman follower who was seriously injured in the crackdown during his protest against corruption.

Ramdev reached the capital from Haridwar via road this afternoon and straight away headed to G B Pant Hospital in central Delhi to visit Raj Bala, who was injured in the pre-dawn police action in Ramlila Maidan on June five.

The yoga guru's protest against corruption and blackmoney had to be aborted soon after police withdrew the permission given to him to conduct a yoga camp, saying he had violated the conditions.

Ramdev was detained by police from the Maidan while he was trying to flee from the spot disguised as a woman. He was taken to airport by police then to Dehradun in a special plane.

Police had erected barricades at the borders to screen those entering the capital and ensure that no untoward incident happen during Ramdev's visit to the capital. Earlier, police had said he was not allowed to enter the capital for 15 days but later retracted from it.

Four Union ministers, including Finance Minister Pranab Mukkherjee, had gone to IGI airport to meet Ramdev, before he launched his fast on June four, to convince him not to go ahead with the fast.

Later, both the sides came to an agreement that he would make an announcement on June five that he would call off the fast the next day. The government claimed he went back on his promise, forcing them to take action.

Police then cited intelligence inputs about threat to Ramdev's life and a communal flare-up to make him call off his protest but as he stood adamant, security personnel swooped on the protesters. 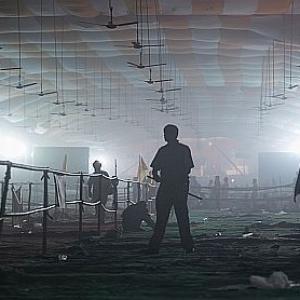