A "historical wrong" was committed by Mughal emperor Babur after his conquest of India over 433 years ago by constructing a mosque at the birthplace of Lord Ram in Ayodhya and it needs to be rectified, a Hindu party told the Supreme Court on Tuesday in the Ram Janmbhoomi-Babri masjid land dispute case. 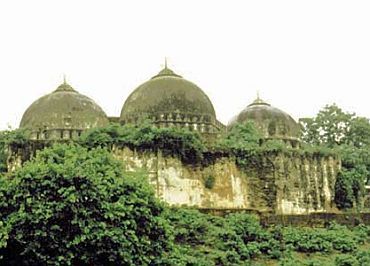 A five-judge Constitution bench, headed by Chief Justice Ranjan Gogoi, was told by former Attorney General and senior advocate K Parasaran, appearing for the Hindu party, that there were several mosques in Ayodhya where Muslims can pray but Hindus cannot change the birth place of Lord Ram.

"Please do the reparation of a historical wrong committed by foreign ruler Babur who came here and said that I am the Emperor and my fiat is the law," the senior lawyer, appearing for Mahant Suresh Das, who is a defendant in a law suit filed by Sunni Waqf Board and others in 1961, told the apex court on the 39th day of hearing in the case.

"Muslims can pray in any other mosque in Ayodhya. There are 55-60 mosques in Ayodhya alone. But, for Hindus this is the birth place of Lord Ram...which we cannot change," he told the bench, which also comprised justices S A Bobde, D Y Chandrachud, Ashok Bhushan and S A Nazeer.

Hindus have been fighting for centuries for the birthplace of Ram which cannot be changed and for Muslims all mosques are equal, Parasaran said, adding that foreigners like Mughals, Portuguese, French and Britishers came to rich India and plundered it which led this country to poverty.

He was responding the lawsuit filed by Muslim parties including Sunni Wakf Board and said their case of 1961 was time-barred under the Limitation Act and alleged that they had sought a declaration about the nature of the building in dispute and did not seek injunction for enforcement of right of worship.

He alleged that Muslims in their lawsuit was not right in seeking possession of the property back as it was in custody of the government authority (custodia legis) since December, 1949 and "therefore, the prayer for grant of possession is sought only to circumvent the limitation of 6 years imposed by Article 120".

Parasaran said it has been said that "ancient mosque" was built by Babur more than 433 years ago after his conquest of India and hence the title of the mosque is "traceable to the conquest and occupation of Emperor Babar" but it has not been proved by the Muslim parties.

He then referred to the findings of a Faizabad court in 1886 on a lawsuit filed by Mahant Raghubar Das and said it was held the mosque was built on the land held sacred by Hindus.

"The burden of proof is on Muslim parties to show that this finding, that the mosque was built on land held sacred by Hindus, is wrong. Even where a case is decided in favour of a party, he can attack findings adverse to him in the appeal filed by the other party," he said.

While he was making submissions that there was a need to correct historical wrong, senior advocate Rajeev Dhavan, appearing for Muslim parties, raised objections that Parasaran was entering into new arguments by referring to theory of conquests by Babur.

The bench then said that it will allow him to make rejoinder submissions.

Parasaran, along with another senior advocate C S Vaidyanathan, said there was a lot of interruption from the other side and the court should set the things right as this is the case of public right.

The bench asked several questions to Parasaran on legal issues like law of limitation, doctrine of adverse possession and questions as to how Muslims are ousted from seeking title over 2.77 acre disputed land at Ayodhya.

It asked whether Muslims can seek a decree of declaration with regard to the disputed property even after the demolition of the alleged mosque on December 6, 1992.

"They say, once a mosque always a mosque, do you support this," the bench asked Parasaran.

"No. I do not support it. I will say once a temple always a temple," Parasaran replied.

The observation assumed significance as Dhavan, had alleged on Monday that questions are asked only from them and not posed to the Hindu side.

Parasaran said Muslims have claimed the title under the doctrine of adverse possession also and it meant that they will have to accept that the temple had the prior title over it.

The bench asked whether a person can be granted the title in a case on account of "long user" if both the parties do not have substantial documents to establish the ownership and said, "Does the long use fructify into the title?"

"This destroys the other person's title," Parasaran replied.

Later, Vaidyanathan commenced arguments for the same Hindu party and alleged that Muslims gave up their arguments of adverse possession and is now seeking the property on the ground of dedication of property as wakf on account of long user.

This led to a verbal duel between Vaidyanathan and Dhavan.

Vaidyanathan took strong note of some murmuring of lawyers from the other side and said: "I cannot continue with the running commentary going on here".

The senior lawyer was saying that Muslims have argued that they have perfected the title by "long and exclusive use" of the disputed property. That would be a definite admission that Hindus or the temple or the deity was the previous owner if Muslims claim benefit of adverse possession doctrine, he said.

As Vaidyanathan said that he cannot argue, Dhavan, in high pitch tone, said, "What is all this. How can he say that I am doing the running commentary".

"Stop this," shouted Dhavan and this led to a sharp reaction from Vaidyanathan as well.

"How can he (Dhavan) say this (stop it) to me," Viadyanthan retorted and urged the court to take note of all this.

The CJI tried to calm the tempers and said "these are disruptions...you (Vaidyanathan) see, how agitated you are looking".

Vaidyanthan then proceeded with his submissions and alleged that the Muslim side can take benefit of adverse possession only if they admit that the deity was the previous and lawful owner of the property.

"They have not proved that there was a grant from Babur... If it was the case of dedication as wakf on the ground of long user, then how can there be a concept of joint possession as laid down in the verdict of one of the judges of the Allahabad high court," he said.

Dhavan again got up and said that he was forced to interrupt as the lawyer for the other side was not giving the complete picture.

"You do not have to point out the obvious to the judges," the bench told Dhavan.

The bench, which heard the matter on 39th day, said, "...tomorrow will be the 40th day and we want to conclude it".

The top court then granted 45 minutes time tomorrow to Vaidyanthan to wrap his arguments and said that other lawyers for the Hindu parties can manage the time among themselves.

The court had fixed October 17 as the deadline to wrap up the hearing in the case.

The arguments in the Ayodhya land dispute would resume on Wednesday.